Many gaming chairs available on the market are similar not only in shape and style, but also in color scheme. Most models tend to be black, or at least dark in appearance with a few colorful accents. This may be because many gamers are more into this color palette. Of course, we can understand if you get bored with this monotonous look or if gloomy tones just don’t fit your decor. Sometimes it just has to be a white model. That’s why we’d like to introduce you to a few white gaming chairs that we’re convinced of ourselves.

Well, it’s not that simple and besides, the idiom is solely attributable to chess. However, if you have a bit of superstitious tendencies, the saying also means that you are always one step ahead of your opponent. But we digress. As alluded to earlier, there are a few reasons to get a white gaming chair:

Presumably, as a die-hard gamer, most of the reasons given here are more or less indifferent to you, but perhaps they also help you in your decision. That you but not immediately blindly buy a chair in racing look, just because it has a white color scheme, we have researched a few models for you, which we can recommend with a clear conscience. The reason for this is as banal as it is simple: not all gaming chairs are the same.

Of course, we understand if you want to get more information on this topic. That’s why we’ve already mentioned in the article Checklist: Gaming chair problems and how they can be avoided in advance, we have already addressed and explained various quality criteria.

So you’re on the lookout for a white gaming chair. Here are the recommendations of the editors.

Admittedly, we don’t have an all-white gaming chair in our repertoire of recommendations. Nevertheless, many of the models presented here are predominantly white. Individual elements, such as the star cross or the armrests, are usually in a darker color – but see for yourself.

A dream in white. This is how the white variant of the DXRacer MASTER Racer (MSRP 469,00 €) gaming chair presents itself. Only the underbody group and the armrests are kept in black. The cover is made of high-quality leatherette and is therefore also very durable. Features of the gaming chair include 4D armrests, a sturdy aluminum swivel base and a mechanism that allows the backrest to tilt 155°. In addition, the integrated headrest and lumbar support can be adjusted as desired. In addition, the US manufacturer has other models up its sleeve that are predominantly white or at least use white as an accent color.

White gaming chairs are also available from noblechairs. The gaming chair manufacturer from the premium segment has no less than three models ready that could inspire lovers of white seating furniture. For example, the noblechairs EPIC (RRP €379.90) offers a touch of luxury. However, this is only available in white in high-quality PU leather – not in genuine leather and also not in hybrid PU leather, as is the case with other colors. noblechairs stands for the processing of premium materials, however, so this restriction is rather less of a problem. On the other hand, the white throne is predominantly white, except for the black outer edge, the base unit and the 4D armrests. The star cross is made of sturdy aluminum and the EPIC also cuts a good figure in other respects.

Other white gaming chairs from noblechairs:

If you like the royal color combination of white-black-gold, you’ll get your money’s worth with the Backforce One (MSRP €499.00) / Backforce One Plus (MSRP €629.00). Both models are made in Germany and are similar in design, with the standard model having a slightly higher white content. In terms of quality and workmanship, however, both gaming chairs are in no way inferior. However, the Backforce One Plus has additional features in comparison. Compared to the Backforce One, the premium model is equipped with padded 5D armrests and 65 mm universal casters. In addition, the Plus model comes with a horizontally and vertically adjustable lumbar support, so that the gaming chair lives up to its name. We can recommend both models without reservation.

Gamechanger is a revolutionary brand from Germany that allows you to customize your gaming chair to the next level. So it’s no surprise that the color white is also part of the manufacturer’s repertoire. The only thing you’ll have to put up with, though, is that an all-white cover is currently only available in fabric – no faux or genuine leather, unfortunately. But the configurator gives you the option to customize (almost) everything else, even the color of the casters. For example, you can choose between a standard or a polished aluminum base, but Gamechanger also offers options for additional upholstery of the seat. As a price example, we have chosen the Gamechanger L in the standard version with white fabric cover – this is available from € 579.00.

The Dutch manufacturer AKRacing also has a predominantly white gaming chair in its range, whose color scheme lives up to its color designation. This refers to the AKRacing Masters Premium in the Arctica color (MSRP €499.00). Except for a few accents in black and red, the white cover made of easy-care PU leather impresses above all with its look, which is reminiscent of the racing style. Well-made and equipped with lumbar and head cushions, the chair delivers what it promises. The 4D armrests and the robust aluminum star cross complete the design.

If that’s not white enough, the manufacturer has another candidate on the bench, namely the Limited Edition AKRacing “California” (MSRP €329.00) in the Laguna color scheme. This version has white armrests in addition to an almost white star cross. Only a few accents are black here.

Other gaming chairs from AKRacing with white contrast:.

For those who want to add accents, we also have a selection of black gaming chairs with white contrast. We can also recommend these models without hesitation. 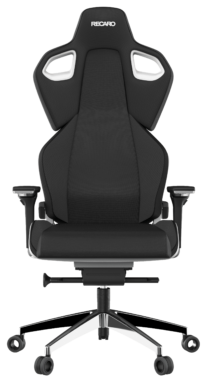 Admittedly, the premium model RECARO Exo Platinum Black & White (RRP €1,099) is not exactly available for the penny, but those who value top quality made in Germany are well advised to go with this model. The two-tone gaming chair impresses with a modern but minimalist design and therefore fits in with almost any interior. Thereby, the front is predominantly black and the back is white. Besides a few cool features, the model scores especially with a maximum load capacity of 150 kg and the possibility to take four different sitting positions. According to the manufacturer, the opinion of gamers and eSports enthusiasts flowed into this development. The RECARO Exo Platinum was awarded the German Design Award (design prize of the Federal Republic of Germany) in 2020.

U.S. computer peripherals and hardware manufacturer Corsair also carries gaming chairs in black and white. However, the Corsair T2 ROAD WARRIOR (MSRP €339.90) only incorporates the bright color into the design as a splash of color. So, if you’re looking for a predominantly white gaming chair, Corsair isn’t the right place for you. However, if you prefer a simple design that scores with white color accents, you certainly won’t go wrong with the T2 ROAD WARRIOR. The cover is made of high-quality artificial leather and is breathable due to the perforation. This not only gives the gaming chair a stylish finish in terms of design, but also keeps you dry during heated battles. The model also features a wide seat as well as a high backrest and, according to the manufacturer, is specially designed for long gaming sessions. Thanks to their microfiber cover, the neck and lumbar support are not only soft, comfortable and easy to clean, but also round off the design with a smooth contrast.

The white parts of the Nitro Concepts X1000 (MSRP €289.90) in the Radiant White color scheme are simple but refined. Predominantly kept in black and gray tones, the 3-color design impresses with white accents, which provide a sporty look, especially on the outer edge. The back and bottom themselves, are monochromatic and kept in the same tone as the backrest and seat. So if you’re more into minimalist white accents, this chair might suit you just fine. As the latest representative from Nitro Concepts, the ergonomic design in combination with a robust steel frame structure also ensures stable gaming fun. Even during long sessions, of course. The cover of the gaming chairs is made of high-quality fabric in carbon fiber look. In addition, the X1000 is equipped with 3D armrests and two comfortable cushions.

White seat, white armrests and a white star cross are pretty cool for one person. But for the other, it might not go well with the decor at all. Or maybe you don’t like big white accents at all and bright colors aren’t your thing either? That also goes plain, because the Sharkoon SGS4 (about 354.00 €) is made for gamers who have an eye for detail. Almost entirely in black, the gaming throne features only a few, very detailed and petite white elements, such as the seams or a plain logo on the inside of the back surface. Apart from logo lettering, even the headrest and lumbar support are completely in a dark tone. At the same time, the cover is made of PVC and the seat surface is made of high-density molded foam. The chair is especially stable and resistant due to its steel frame construction and the aluminum star cross.

If that’s not white enough for you, you might want to consider the black and white version. As a particularly eye-catching counterpart, Sharkoon has the SGS4 in another color variant in its repertoire, which anchors far more white elements in the design. Here, only the seat, part of the backrest, the star cross and the 4D armrests as well as fine contours of the gaming chair are kept in black.

Other gaming chairs from Sharkoon with white contrasting elements:

Often the contrast white is unfairly frowned upon as dirt-attracting element. Don’t wear white pants, you’ll see every stain on them! With gaming chairs, however, the situation is somewhat different. As a rule, it’s not necessarily the color that matters, but the material used. High-quality and easy-care materials are often used, such as PU leather or water-repellent fabric. Therefore, the cleaning is quite easy, according to experience. A little water, a cloth and maybe a gentle cleaning agent and the gaming throne looks like new again. However, you should always follow the manufacturer’s care instructions. Of course, as is often the case in life, you can expect less from a cheap model than from a higher-quality one.

Many gaming chairs available on the market are similar not only in shape and style, but also in color scheme. Most models tend to be black, or at least dark in appearance with a few colorful accents. This may be because many gamers are more into this color palette. Of course, we can understand if … (Weiterlesen...)