Together with the Mac Pro, which is estimated to cost up to 50,000 dollars, Apple also presented a new monitor at WWDC 2019. The Apple Pro Display XDR is 32-inch and offers a resolution of 6,016 x 3,384 pixels. The price is 5,000 dollars, an optional stand that makes the display appear “virtually weightless” costs 1,000 dollars.

XDR instead of HDR

The name extension “XDR” or “Extreme Dynamic Range” is an extension of High Dynamic Range (HDR). The permanent brightness of the display is thus 1000 cd/m², individual areas can reach a punctual maximum brightness of even 1,600 cd/m². The contrast ratio is 1,000,000:1. Apple delivers the 10-bit display with factory calibrated color settings. The DCI-P3 color space is completely covered. Unfortunately the display offers only 60 Hz refresh rate.

The front is completely covered with glass and has 9 mm wide edges. Apple has also applied an anti-reflection coating that makes it easy to work in strong light sources and sunlight. As an option, Apple also offers the screen as a matt version with a nano texture of etched glass. The surcharge is $1,000.

The back of the display resembles the “cheese grater design” of the Mac Pro. Compared to other monitors, the Apple Pro Display XDR seems to get very hot due to the extreme brightness. Despite the back, which also serves as a heat sink, according to Apple the maximum brightness is therefore only reached at room temperatures of up to 25 degrees. The monitor also has an active cooling system that supplies fresh air to the panel and the TCON control chip for the 576 local dimming zones.

In combination with the new Mac Pro, up to six Apple Pro Display XDR can be used in parallel. The user has 120 million pixels at his disposal.

The so-called “Pro Stand” for $1,000 offers the usual adjustment options such as pan, tilt and turn as well as a pivot function. According to Apple, counterweights should ensure that the mechanics can be used particularly smoothly. In addition, the angle of inclination should be maintained exactly even when the height is adjusted.

An optional VESA mount, which is standard on practically every other monitor, also costs Apple a proud 199 dollars extra. 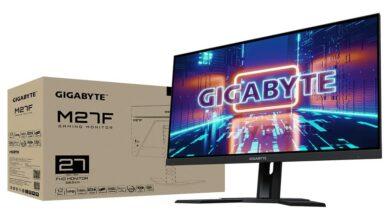