Measuring 600 mm x 95 mm, the Sound Blaster Katana V2X is larger than its Razer counterpart, but still fits comfortably on most desks or under the TV. It marks, as the name suggests, the compact variant of the Katana V2, which was very well received by fans and the trade press and also convinced in our test.

Sound-wise, the same drivers are used as in the larger model. Two 63-inch midrange drivers, two 19-inch tweeters and a 165 mm subwoofer together provide an output of 180 watts at peak. Covered is a frequency band from 50 Hz to 20,000 Hz.

Super X-Fi headphone holography, which recreates the sound of a multi-speaker system in headphones, is also in the mix. The Sound Blaster Katana V2X’s SXFI BATTLE mode is aimed primarily at shooter fans and is meant to better emphasize audio cues like footsteps and the like.

Thanks to the integrated Dolby Audio Decorder, the soundbar should also be able to convince when streaming movies and series. The Creative app can also be used to adjust the sound, while various RGB lighting modes are available.

These settings can be saved as custom profiles either in the app or via the programmable buttons on the remote.

In terms of connections, the soundbar is well positioned. On offer are HDMI Arc, optical connections, Bluetooth 5.0, USB-C with audio support, as well as a 3.5 mm AUX input and SXFI output each for certified Super X-Fi products. This makes the V2X ready for use with a wide range of devices, including PC, Mac, PlayStation 5 and 5, Xbox Series X/S and One, or Nintendo Switch.

The Creative Sound Blaster Katana V2X soundbar is available at a suggested retail price of $309.99 on Creative.com. For more information, visit the official product page. 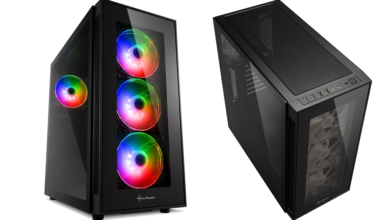 Sharkoon TG5 Pro RGB – The classic gets an upgrade

JBL LIVE 300 TWS – What can the Premium-In-Ears offer?