The Chinese computer and smartphone manufacturer Lenovo has introduced three new monitors for its L-series. Among them, a mobile monitor in 15 inches and two IPS panels for use in a fixed location.

The L32p-30 is particularly slim and comes with a screen diagonal of 31.5 inches, while it resolves in UHD with 3,840 x 2,160 pixels and displays content at 60 Hz. The panel achieves typical values for brightness and contrast, from a maximum brightness of up to 350 cd/m² and a contrast of 1:1,000. The monitor achieves 10 bits in color depth thanks to FRC simulation. The DCI-P3 color space is covered by up to 90% and the panel achieves a response time of 4 ms via overdrive. AMD FreeSync and Adaptive Sync are also supported.

On the connectivity side, there’s a DisplayPort 1.2, four USB-A ports, a USB-C port that powers connected devices with up to 75 watts, a headphone jack, and an HDMI 2.0 port. A webcam can be ordered as an option for the Lenovo L32p-30.

The L27m-30 is also an IPS panel in a slim bezel and comes in 27 inches. Here, the panel resolves in Full HD with 1,920 x 1,080 pixels. The content is displayed with 75 Hz here. The 6-bit panel simulates a color depth of 8 bits via FRC and the NTSC color space is covered by up to 72 percent. The brightness reaches a maximum of 250 cd/m². On the connectivity side, the Lenovo L27m-30 cannot offer quite as much as the larger model. Although the panel has the same number of USB ports, it only offers a 1.4 port for HDMI, which is supported by an outdated VGA input. The USB-C port with DisplayPort also supplies the devices with 75 watts here.

When it comes to ergonomics, however, the Lenovo L27m-30 scores and comes out on top with its height adjustment and pivot. With its average features, the panel is especially intended for the home office or school at home.

Lenovo has introduced a third monitor for on the go, the compact L15 Mobile. This is particularly suitable as a second monitor for notebooks or smartphones. Lenovo’s L15 is very reminiscent of the laptop segment from the manufacturer. The diagonal of the L15 is 15.6 inches, the ports are on the side and it has a practical stand. The IPS panel has a Full HD resolution at 8 bit and renders the content with 60 Hz and 1,920 × 1,080 pixels. In terms of color spectrum, the compact monitor achieves just 45 percent of NTSC and the response times are also much higher here than in the other two models.

The L15 is easy to take along due to its compact design; despite the stand, it weighs just 860 g and measures 245.5 x 360.0 x 108.4 mm. The monitor is supplied with the necessary power via an external power supply, which is connected via one of the two USB-C ports. The second USB-C port can then be used to supply another device with up to 65 watts. The switch for adjusting the brightness and activating the Low-Blue-Light mode as well as the power button are located on the flank of the stand. For a better alignment of the monitor, it can be tilted up to 90 degrees and offers a height adjustment of up to 10 mm.

Optional for the L-series desktop models, as well as other S-, Y-, G- and Q-series devices, is the Lenovo LC50 webcam. The camera module has an RGB sensor that offers video recording up to 1,080p with 30 fps in a field of view of 90 degrees. The webcam is attached to the upper edge of the monitor by means of a magnet. To prevent unwanted recordings, the webcam also has a manual shutter. The light emitting diode also shows the user when recording is in progress. For voice recordings, two microphones have also been integrated into the webcam, which also suppress background noise. 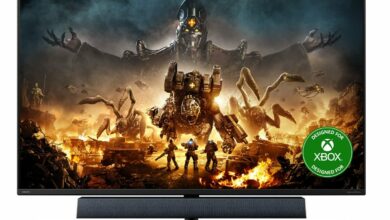 The Chinese computer and smartphone manufacturer Lenovo has introduced three new monitors for its L-series. Among them, a mobile monitor in 15 inches and two IPS panels for use in a fixed location. Lenovo L32p-30 in 32 inches . The L32p-30 is particularly slim and comes with a screen diagonal of 31.5 inches, while it … (Weiterlesen...)