Sharkoon has turned everything upside down with its popular REV series. Thus the case experts have installed more fans on the back, moved the window to the right side, and simply turned the mainboard around. This makes the REV100 very different from the usual arrangement. The new arrangement is already known from the REV220 – But there you have to live with a much higher price.

The new arrangement of the components brings many advantages. Because Sharkoon rotates the mainboard, the installation of a second fan in the rear is possible. In combination with the maximum of three active fans in the front, a reliable air circulation inside the case is ensured. Since the fan accumulation at the front does not allow for the installation of connections, Sharkoon places these on the top. They can be found under a flap. Should one decide on this configuration, the REV100 power supply unit is located at the bottom of the case. In front of the power supply is a holder for HDDs. But there are more places for storage media. So there is a mounting place for 3.5 inch drives as well as an attachment for a 2.5 inch or 3.5 inch drive at the top of the case. In addition, two more 2.5 inch HDDs can be placed behind the mainboard.

So the manufacturer saves

Of course, the lower price is not by chance. Manufacturer Sharkoon rather saves quite a bit of money with the new layout. This already begins with the power supply cover. Here the manufacturer uses a somewhat simpler model that is open at the top. In addition, the REV100 saves costs with a smaller viewing window. Furthermore, instead of five fans you now only get two at the factory. But you don’t have to do without the pretty lighting of the predecessor. In the updated version of the REV100, there is still an RGB controller that can be used to light up to four RGB devices. In the slightly larger REV220, the manufacturer has installed LEDs on both the rear and front sides. This is now also the case with REV100.

Some things remain the same

But Sharkoon’s savings ambitions are not without limits. For example, graphics cards with a maximum length of 315 mm can be installed in the REV100. But this applies to each individual expansion slot. However, one must make a compromise at one point. Especially in the place of the HDD cage, there can be limitations. If one uses two 3.5 inch data carriers there, the graphics card may be a maximum of 288 mm long. Beyond that, you can now also use slightly higher coolers. But the advantages of this step are debatable. After all, the REV220 could already be used with almost any current model.

The much cheaper REV220

The strategic changes in layout direction are paying off for all parties involved. After all, with the REV100, Sharkoon creates a case with the advantages of the REV220 at only two-thirds of the price. For more than a fair 65 euros, there is a solid case in the middle class with the REV100. 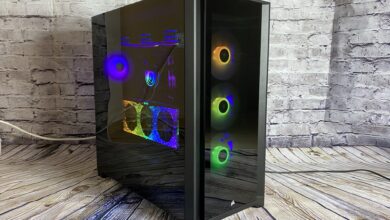