Silverstone has introduced a new tower case that comes up with interesting features and a sleek design. The Silverstone Alta G1M is a micro ATX tower that is offered in two different colors and also wants to convince in office use.

In terms of design, the new tower is strongly based on the Silverstone Fortress FT03 released in 2011, but in a modernized form. The Alta G1M case relies on a “chimney design” and allows motherboards to be installed at a 90-degree angle to achieve the smallest possible depth (of 200 mm). At 507 mm, the tower, which shears around 6 kilograms, grows primarily in height.

A 180 mm fan from Silverstone’s AirPenetrator series works in the bottom of the Silverstone Alta G1M, which emits the cooling air upwards through the entire tower. A total of five 120 mm fans can also be mounted in the rear and behind the right side panel. Alternatively, a radiator with a size of up to 360 mm can be installed on the right side to cool the CPU and the hanging graphics card.

CPU fans with a maximum height of 159 millimeters can be installed, but this is reduced again when using the optional fans. If you forgo additional cooling, there is room for up to four 2.5-inch or 3.5-inch HDDs in the case. Of course, this makes sense in view of the increasing use of NVMe models that fit directly on the motherboard.

Graphics cards are allowed to be 165 millimeters wide and 355 mm long, and they draw fresh air directly from the mesh front of the Silverstone Alta G1M. The power supply is installed crosswise in the rear. Here, Silverstone relies on the SFX and SFX-L form factor to be able to install additional fans and fan openings. The mesh fabric on the lid and the rear thereby enables an optimized dissipation of warm air.

The Silverstone Alta G1M micro-ATX tower is expected to make its way to retail by the end of 2021. A black model (SST-ALG1MB), as well as a white variant (SST-ALG1MW) are available. The manufacturer’s MSRP is around 170.00 US dollars. 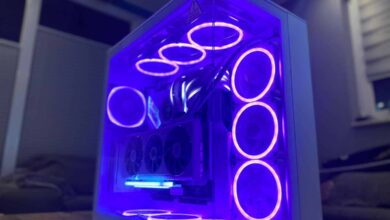 NZXT H9 Elite in review – A lot of glass and a lot of dust protection!

Silverstone has introduced a new tower case that comes up with interesting features and a sleek design. The Silverstone Alta G1M is a micro ATX tower that is offered in two different colors and also wants to convince in office use. Elegant, but simple Micro-ATX tower In terms of design, the new tower is strongly … (Weiterlesen...)