With its GS170, Gigaset is launching a new smartphone on the market for just 150 euros. The new device doesn’t cost much more than its predecessor, but the differences are marginal. We have tested the Gigaset GS170* with Android Nougat for you and draw a comparison to the Gigaset GS160.

Our first suspicion of a lower-quality smartphone was not confirmed during unpacking, which was suggested by the very low price. Because in this rather cheap price class we discover numerous features that are by far not typical for them.

First we were approached by a haptically extremely high-quality 5 inch measuring display made of hardened glass. This is rounded on the outside and offers an HD resolution of 1,280 x 720 pixels. Another highlight is the fingerprint sensor. This was ergonomically placed Gigaset at the rear of the GS170, directly in the detection area of the index finger. Nevertheless, the sensor is sufficiently far away from the lens of the integrated 13 megapixel camera. On the front of the Gigaset GS170 we find a second camera with a resolution of 5 megapixels. This makes it very suitable for Selfies.

The Gigaset GS170 makes a solid impression in terms of its workmanship. It has a light weight of 139 g and dimensions of 144 × 72,3 × 9,5 mm. The back is easy to remove and resistant to fingerprints. This was made of slightly roughened, matt plastic. Thanks to the rounded corners, the Smartphone is easy to hold. A good pressure point is provided by the volume rocker and the power button. The rear cover can be individually replaced in Urban Blue or Mocha.

The main camera is located on the back, in the middle of the Gigaset GS170 relatively at the top. Underneath are the LED flash and the fingerprint scanner. On the right front side is the second camera. The notification LED is attached to the left of this. Above the edge we found a headphone input, below a microphone as well as a microUSB connection for data exchange and charging. At the bottom of the back are the speakers. While the edges at the top and bottom are rather protruding, they are kept quite narrow around the display on the left and right hand side.

Display of the Gigaset GS170

The IPS display with a resolution of 1,280 x 720 pixels achieves a total pixel density of 294 ppi. Thanks to its viewing angle of 178 degrees, the screen convinced us with its relatively good viewing angle stability. We also liked the colour rendering very much. For outdoor use, however, the maximum brightness could be a little higher. Due to the HD resolution on the 5 inch display, a pin sharp picture is provided.

Hardware and Software of the Gigaset GS170

The Gigaset GS170’s plastic ingot housing accommodates dual SIM and FM radio. On board are a quad-core processor from Mediatek with a clock frequency of 1.3 GHz as well as the modern operating system Android in version 7.0 Nougat. Both ensure smooth working and also make a Smart-Draw function possible. With the help of these it is possible for you to define eight finger patterns. Thanks to them you can easily access various functions or apps.

In addition to these gimmicks, the Gigaset GS170 comes with a fast 4G. As standard, the smartphone has an internal memory of 16 GB and a RAM of 2 GB on board. The internal memory can be expanded up to 128 GB using the Micro-SD slot. Only the 2 GB RAM seems a little tight to us, but is already better than the 1 GB of the GS160. 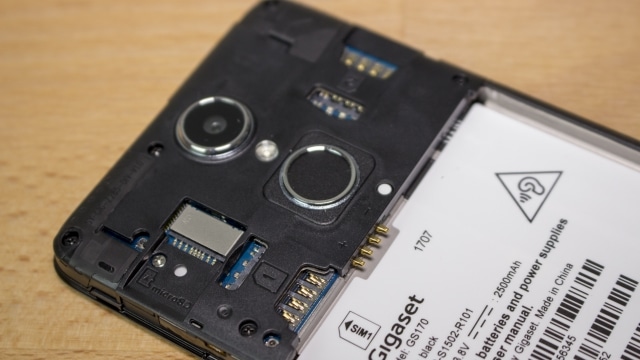 In addition to a microSDXC card slot, there are two other card slots on board that can be used for dual SIM operation. The mobile Internet can be used up to LTE speed. Connection possibilities with other devices are possible via Bluetooth 4.0. Only NFC we missed.

In addition, Gigaset has some apps pre-installed. If you don’t want to use them, they can be uninstalled without problems.

With the Gigaset GS170*, the 13 megapixel main camera and the 5 megapixel camera deliver good results. The cameras don’t get along well with low-light shots. Here there is a clear picture noise and missing contrasts. Videos can be recorded with a maximum of 720p.

In good lighting conditions, the cameras deliver relatively good images and details can also be seen. However, rain clouds in the sky make for darker-looking shots, so that details are less visible. The HDR mode provides a little help here, but the missing image stabilizer and the very long release time are very disadvantageous and cause blurred images. HDR recordings are actually only possible with a tripod. The camera’s automatic compensates very well for strong contrasts triggered by sunlight. Close-ups are less effective. Selfies appear somewhat blurred at the edges. So both cameras are not really suitable for more than one snapshot in between, but that’s how it is in this price range. You can download the pictures in original size here.

I like the quality of the GS170’s integrated speaker, but the treble is often very dominant and bass is almost non-existent. It’s also a shame that Gigaset has placed the speaker on the back of the device: If you place the smartphone on a surface, much of the sound is lost. The volume of the loudspeaker is good in itself, but at higher volume levels it sounds very distorted and unbalanced.

The music quality via the 3.5 mm jack plug is also okay rather than really good. For rather undemanding users it’s enough, but the GS160 doesn’t come close to the sound quality of a good mid-range or high-end smartphone.

The Gigaset GS170 uses pure Android 7.0 nougat as the operating system. Despite the inexpensive hardware, this runs relatively smoothly and sufficiently fast. But of course you have to be patient longer than with high-end smartphones. If too many tasks have to be done at the same time, the RAM upgrade doesn’t help compared to the predecessor either.

In addition to the pure Android operating system, Gigaset also includes its own screensaver and ringtones with the GS170. Five apps are also pre-installed ex works: T-Online News, Weather app, Fuel app, Discover Gigaset app and a help app. However, these can be uninstalled without any problems. An additional special feature are the so-called SmartDraw features: Even when the screen is switched off, up to eight different wiping gestures can be started by drawing letters in apps. Screenshots can also be created easily with a wipe gesture.

A further intelligent feature concerns the fingerprint sensor: The individual fingers can be assigned certain functions, so that by laying down a finger different actions, such as calls, photos, etc. can be triggered.

The Gigaset GS170 has a 2,500 mAh battery. This is not much compared to other smartphones, but the hardware of the GS170 is so economical that the battery life is still satisfactory. One day the device should survive well, I have mostly even had about 50 percent. The battery is exchangeable, so it can be replaced if necessary. It is conspicuous that in the synthetic benchmark a much worse value is achieved than in the GS160, although the differences are very small.

Unfortunately, the device has no quick charging function, it takes more than three hours until the battery is full again. A MicroUSB port is used for charging just like with the GS160.

Meanwhile, the fast LTE can also be found in smartphones in this price class. This ensures fast Internet even on the go. Bluetooth 4.0 LE and WLAN 802.11 b/g/n are also on board. However, NFC and the wireless charging standard Qi must be dispensed with. However, both technologies are not common in this price class either. In addition, a GPS receiver is built in, so the device can also be used as a navigation device, for example. The integrated microphone is sufficient for making phone calls and sending voice messages, but unfortunately it is not outstanding, as you would expect from Gigaset.

Conclusion on the Gigaset GS170 Review

In our test, the Gigaset GS170 scored well in almost all aspects. While we found fault with the Gigaset GS160’s RAM, which is very tight at one gigabyte, the GS170 is equipped with 2 GB and is therefore much better equipped for everyday use. The operation is therefore as fluid as possible. The touch screen and the fingerprint sensor are convincing. The battery life and especially the multimedia functions like camera and sound are unfortunately less. The battery life has even decreased compared to the GS160 – is this due to the Android 7.0 nougat?

If you don’t want to play games with a lot of effects and don’t want to make big demands on sound and camera, the Gigaset GS170* is a good choice. However, you should wait until the price has fallen. Because the GS160 is already available for less than 100 Euro, but is almost identical in construction, but only has Android 6 Marshmallow.

As with all smartphones, we recommend the use of a glass film to protect the display.

The Gigaset GS170 is ideal for beginners who value ergonomics and security with a fingerprint sensor. However, the reach for the predecessor is worth considering.