With the P20 Pro, Huawei has released a new flagship that should set an example and revolutionize the smartphone world. This is to be achieved above all with the help of the new camera, which is described as groundbreaking. Huawei wants to impress and wants to achieve this – at first glance at least – through quantity. The Asian manufacturer, for example, has three cameras on the back of the new smartphone and is proud to announce that 40 megapixels will revolutionise photography.

These advertising statements should not be trusted. Nevertheless, some things can be seen from these statements: Huawei is enormously self-confident, has created a unique selling point and is now forced to deliver an actually much more than solid smartphone.

While most manufacturers have been relying on the tried and tested lately and have held back with outstanding announcements, Huawei has taken the courageous step forward and cleverly draws attention to his new smartphone. This is precisely what we have subjected to an extensive test. Can the Huawei P20 Pro really trigger a smartphone revolution? Is it noticeably different from the solid mush of recent times? Does it deliver what it promises?

First of all it is noticeable that the smartphone is comparatively long. The display is already anything but reserved with a diagonal of 6.1 inches. In addition, there is a small border below the display that stretches the smartphone even further. However, it is not remarkably broad.

The back is far less conspicuous than that of its predecessor. The camera can now be found in the corner and is arranged in the same way as the new iPhone. The fingerprint sensor is located on the front of the P20 Pro, which explains the border below the display. He is accommodated there in a homebutton mounted especially for him. The front mounting of the upper sensors results in a curiosity: at the top there is an omission in the screen – called Notch. Correspondingly little edge can be found above the display. At the bottom, on the other hand, there is a rather thick border to allow space for the fingerprint sensor technique. At first glance, these unusual proportions seem abstruse, but explicitly do not represent a point of criticism. Already after a comparatively short period of use one has become accustomed to Notch.

The workmanship of the device is, however, very good and offers no cause for criticism. Glass can be found on both the front and back, while the frame is made of aluminium. All transitions from glass to aluminium are well made and therefore hardly noticeable. The transition to the display, on the other hand, can be felt, but this doesn’t have an annoying effect, as the edge is not sharp and therefore doesn’t interfere with use.

A 3.5 mm jack connection is not available. If you want to listen to music via directly connected headphones, you have to use the supplied adapter. It is also not possible to insert memory cards. Users must get along with 128 GB.

The size of the display has already been mentioned as well as the omission in the upper part – the notch that became known through the iPhone. The OLED display has a resolution of 2,240 x 1,080 pixels and has been noticeably improved compared to its predecessor. It’s not as good as the displays of the iPhone X and the Samsung Galaxy S9 in terms of quality, but it’s still quite respectable. As expected, the brightness of the display can be adjusted as desired. 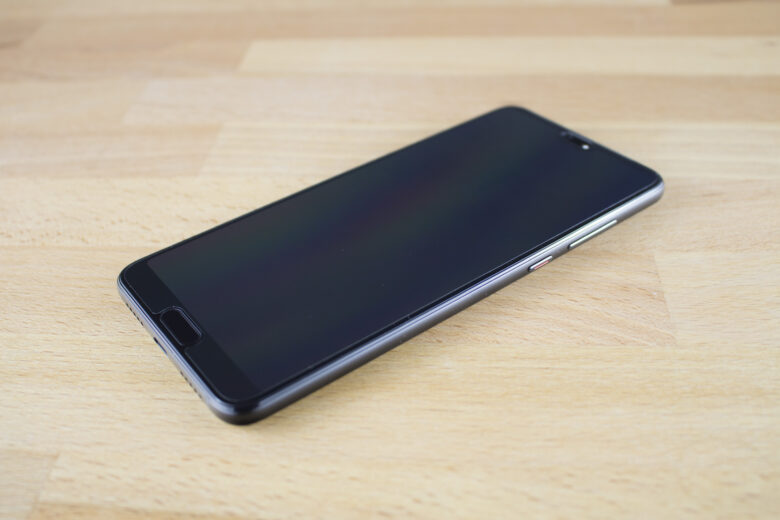 Overall, the display is absolutely satisfactory in terms of resolution and suitable for everyday use. All content is displayed as it should be. The brightness can be adjusted to one’s own wishes and real points of criticism cannot be found.

As already mentioned, the only peculiarity is the Notch. This is noticeably smaller than the iPhone X, which Huawei emphasizes in advertising terms. The difference is due to the fact that the P20 Pro’s display omission accommodates significantly less technology than the iPhone X.

Huawei, however, comes up with a fist-thick surprise. The manufacturer seems to be well aware of the fact that display omissions are controversial. Many users feel considerably disturbed by notches and would give a lot to get rid of the omission. With the P20 Pro this is possible with a simple trick. Huawei allows the “parking” of the Notch. All you have to do is change a setting. The edges of the display surrounding the notch are then darkened so that it is no longer visible. In the case of videos, the omission of the display is hidden in any case. A compliment must be paid to Huawei on this point. The solution to the problem is quite creative and is likely to appeal to many users who love to do without the polarizing recess. All others simply leave the hide function deactivated and can enjoy their notch.

Due to the offensive application, the camera must be subjected to a very detailed test. Due to the advertising focus on the camera, the success of the smartphone depends on it. Huawei’s P20 Pro is the first smartphone to feature three cameras on the back. It remains to be seen whether this is a “revolution” – this assessment is incumbent on each interested party itself. The first sensor has 40 megapixels at an f/1.8 aperture, the second has twenty megapixels at an f/1.6 aperture and the third offers eight megapixels at an f/1.2 aperture. On the front there is also a camera with 24 megapixels and an f/2.0 aperture. So a total of four cameras are installed.

Now Huawei confidently announces that it is a revolution and the best smartphone camera in the world. Ultimately, such an assessment is always subjective. In the test we can see that the results of the Huawei camera are in no way inferior to the results of the cameras of other high-calibre smartphones – iPhone X and Co. But which photos are more attractive or “better” has to be decided by the user himself. Ultimately, however, Huawei never promised too much: The camera is outstanding and produces grandiose photos.

In addition, there are some extras that can be switched on if necessary. This includes artificial intelligence, which corrects the photos taken while they are still being taken, thus enabling better results. At the beginning some “corrections” seem strange. Thus skin tones and similar details are easily falsified by the AI. However, the technology should be capable of learning in the broadest sense, which should lead to ever better results over time.

A particularly positive feature is the zoom function, which differs significantly from the zoom function of other smartphone cameras. According to the manufacturer, all three cameras always work together when zooming, which should lead to a more realistic, more stable shot. In fact, the image stabilization is very impressive even at maximum zoom. Of course, professional cameras achieve better results. But the P20 Pro definitely stands out from other smartphones.

Night shots, however, are the camera’s greatest strength. Shooting in the dark is really great. Even the iPhone X and Pixel 2 are surpassed by far in night shots. The image stabilization of the Huawei P20 Pro also helps in this case, as a result of which the images from the wrist can be exposed much longer.

Only shortcoming: Video recordings are not particularly intoxicating. The quality is good, but not more. While the photos can actually put all other smartphone cameras in the shade, the camera does not stand out in videos.

All photos you can download here also again in the original uncompressed.

The performance of the smartphone can be described as average. It is average fast and runs average well. Overall, it is on a par with the Mate 10 Pro in terms of this rating point. The latest apps and games are easy to use and run smoothly. This is also the case with demanding games.

The latest Android version 8.1 is used as the operating system, which is worthy of praise. Even Samsung didn’t consider it necessary to ship his latest smartphone with the current Android version. Huawei, on the other hand, proves that it pays attention to even the smallest details and that it can respond to the needs of its customers.

EMUI, Huaweis adapted Android surface, still needs getting used to. Users who are not familiar with Huawei devices may be prepared for a familiarization period, as the user interface differs significantly from that of other manufacturers. Ultimately, however, EMUI is also an Android surface, so that at least basic orientation should be available. It is also largely customizable and can be replaced by another launcher if necessary.

Of course, the energy-saving administration of Huawei deserves special mention again. This is very aggressive. This means that the battery lasts for a long time, but many push notifiers fall victim to this. Unfortunately, this cannot be set correctly either.

Facial recognition was built in. However, it is not a 3D face recognition, which minimally reduces security. The recognition works extremely well and fast even in dark environments, so that you hardly have to resort to the fingerprint.

The fingerprint sensor convinces in the test. It is extremely fast and therefore clearly surpasses sensors of the competition.

The speech quality is good in the test. The loudspeakers can also be convincing when playing music, especially since the earpiece is used as a second loudspeaker for stereo sound.

Since a 4,000 mAh battery has been installed, the long battery life is not surprising. A frequent user will be able to use the phone for a day without having to recharge the battery. With average use, the battery might even last for two days. Huawei also uses its own SuperCharge technology, which charges the battery within a very short time. However, Qi is not used, which might disturb some users with an affinity for technology.

The P20 Pro from Huawei is convincing overall. The camera is excellent. Huawei also offers the latest software, a very good battery and solid performance. Of course there are some minor criticisms – the missing headphone jack and the video quality can’t keep up with the photo quality. However, these are overshadowed by the many advantages of the Huawei P20 Pro. All in all, it’s an exciting smartphone that delivers what it promises. With the P20 Pro, Huawei presents a real surprise that sets itself apart from other smartphones.

The Huawei P20 Pro is a successful smartphone with an outstanding camera. Photo enthusiasts will find in him probably the best smartphone camera in the world - absolutely recommendable.

Realme C21Y and C25Y launch with 5,000 mAh battery and triple camera in Europe

How Does NFC Work?