With the Inspiron 15 7577, Dell has brought a high-quality gaming notebook onto the market that is supposed to convince with its hardware and the associated performance. The following test, which we subjected the notebook to, will show to what extent this actually works in practice.

The case looks quite familiar, which is due to the proximity to the predecessor models. The new Inspiron notebook stands out clearly from similar devices in purely optical terms. One reason for this is the clear gap between the screen and the base plate, which does not turn out to be disturbing in the test. It enhances the optical quality of the entire device and is, in a sense, one of the optical highlights. The fear that the screen might bounce back due to the gap in typing turns out to be unfounded in the test – the notebook is absolutely stable, which suggests very good workmanship on the part of Dell.

The base plate of the laptop proved to be well processed overall in the test. It withstands pressure, all material transitions are well processed and twisting attempts remain unsuccessful. However, the sharp edges of the plate, which could be dangerous if not careful, are a negative feature. *In addition, fingerprints on the material used are quite clear. The illumination of the keyboard allows a perfect view of the keys even in the dark.

What is striking is that the screen is attached with only one hinge. This can be bent up to a maximum opening angle of 140 degrees. No problems arise. When opening and closing the lid, however, a slight creaking is noticeable.

Despite the minor criticisms, the notebook is well processed and makes a stable, high-quality impression. In comparison with other devices in the same price and performance class, it can be described with a clear conscience as a well-made device.

The screen diagonal of the Inspiron 15 7577 is a total of 15.6 inches long, which corresponds to 39.6 centimeters. The screen is averagely large for a gaming notebook. The resolution, which should be much more interesting for most potential customers, is 1,920 x 1,080 pixels. Players who pick up the Inspiron 15 7577 will enjoy a sharp display of all content.

The FullHD presentation of the contents is customary in the market and guarantees a realistic experience. The screen displays the contents in the familiar 16:9 format.

The processor used is an i7-7700HQ from Intel. This was presented at the CES in January 2017 and can therefore still be described as current, even if faster models already exist. The i7-7700HQ is still one of the fastest mobile processors.

The processor is provided with 16 GB RAM in our test device. The graphics card used is the GeForce GTX 1060 from Nvidia. In comparison to other Dell devices, this notebook uses a very high-quality and powerful graphics card that promises an ideal graphics implementation even for demanding games and applications. Anyone who picks up this model is in any case optimally equipped – so the card proves itself in the test to be a sovereign and integral part of the Inspiron’s hardware equipment. Without them, the extremely good performance would hardly have been possible. For FullHD, the graphics card is also absolutely sufficient for current game titles.

With regard to the hard disk, there are various options to choose from. Our model is equipped with a 256GB M.2 NVMe SSD and a 1TB HDD. At this point it can already be stated that no compromises need to be made with regard to storage capacity – it is highly probable that a suitable option will be found for every user.

Connectors include a 3.5 mm jack, three USB 3.0 ports, one C-type USB 3.1 port, one HDMI port, and one RJ-45 port. An SD card reader is also available. The given connection possibilities are therefore absolutely sufficient.

The following table shows the technical data and specifications of the tested notebook:

The performance of the Inspiron 15 7577 is comparatively good. We’ve put the notebook through a series of tests that provide more insight into the actual performance of the processor and graphics card. Current game titles can easily be played on high details, but you should also pay attention to the volume of the fans, which should not be underestimated. During normal operation, however, the fans are all the quieter and even under load they come off better than competing products.

As far as the battery is concerned, a glance at the technical data reveals that it is less powerful than the one used in its predecessor. The number of cells was reduced from six to four, which, as expected, also leads to a reduction in battery life. With a capacity of 56 Wh, it is now an average of seven hours – in the predecessor model, however, the battery lasted an average of ten hours.

The reduction of the battery size seems appropriate in view of the also quite small batteries of the competition, but will certainly be annoying for some users. It takes about two hours to fully charge the built-in battery.

At this point you can find the first clear point of criticism of the device. Although the reduction of the battery size is understandable for economic reasons, Dell will annoy customers who own the predecessor model. New customers, on the other hand, shouldn’t notice the reduction in size, as the previously oversized battery is now on a par with competing products.

With the Inspiron 15 7577, Dell has delivered a good gaming notebook that’s worth seeing. The fast GTX 1060 offers enough graphics power to adequately display current games on the FullHD display. The battery life and volume are also convincing. Nevertheless, this is a budget notebook, which is why some cuts were made to the keyboard.

With the Inspiron 15 7577, Dell has delivered a good gaming notebook that's worth seeing. 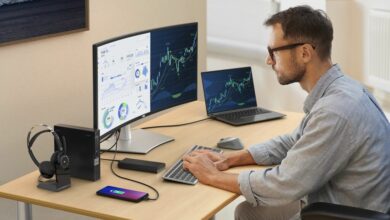