The Blue Microphones Raspberry is a small USB microphone with which Blue is primarily aimed at podcasters and YouTuber who want to make high-quality recordings while on the go at trade fairs or similar events. With the Blue Yeti (to test) this is also possible, but the size is impracticable. With the Raspberry, Blue offers a really small, portable microphone that can be easily carried along.

Especially cool is that it can be used not only on Windows or MacOS PC, but also on iPhone, iPad or iPod via Lightning cable. Unfortunately Android is not officially supported, but Blue Raspberry also works with some smartphones. The connection must then simply be made via USB-OTG.

The Blue Raspberry was able to convince me of its quality, but I still discovered a few defects. If you are willing to spend more than 200 Euro on a microphone, you should read on now. 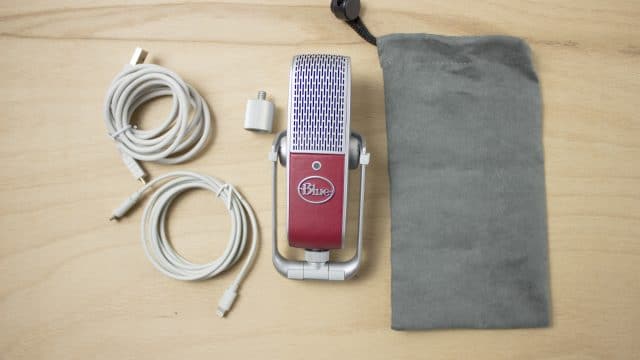 A microphone stand adapter is also included. This means that the microphone can not only be mounted on camera tripods, but also on real microphone tripods. The stand for placing the Raspberry on the table is already mounted directly on the microphone.

Optically the Blue Raspberry is kept very simple. It is mainly based on a simple metal look, but is made of plastic. However, this is not a bad thing, because the plastic also feels valuable and is cleanly processed.

In the lower half of the microphone, raspberry-colored accents are set that match the microphone’s name. The surface is slightly structured, which leaves the impression of leather and therefore looks noble. Embedded or mounted on this surface, we also find an LED on the front above the Blue logo. This shows the current status of the microphone: Red (muted), Green (all OK), Red flashing (override).

On the back side we find a Micro-USB and a jack connector. The microphone is connected to the PC, Smartphone or Tablet via Micro-USB. Headphones can be connected via the jack connector to listen to the recordings, for example. When connecting the Micro-USB cable, the gap is unfortunately very large, as you can see on the picture.

On the underside of the Blue Raspberry we find the tripod thread, which allows the USB microphone to be mounted on camera tripods. As a standard we find here the stand, which is flexibly movable. It can also be folded up to take up very little space during transport. Even if the stand allows a secure stand, there is still a faulty workmanship: The rubber coating is unfortunately not really firm and slides down again and again. If this is the case with you, you can simply fix it with super glue.

The Blue Raspberry can be used immediately after it has been connected via USB or Lightning, thanks to Plug and Play. The microphone may still need to be set as a recording device, but you do not need a driver.

To achieve good recording quality, Blue Raspberry uses Blue’s patented Acoustic Internal Diffusion (AID) technology. This technique is also used in recording studios or concert halls to filter background noise and focus on the voice or instrument. In my opinion, this technique works well, but you have to make sure that the microphone is well aligned, otherwise it sounds like you’re sitting further away.

The cardioid condenser microphone comes close to large-diaphragm microphone level and delivers a super sound. If you increase the gain, you can easily record recordings from a greater distance without much noise. Blue’s capsule technology seems to successfully prevent distortions here.

So that you can get your own impression of the recording quality, I have of course recorded a soundcheck again. So you can listen to an unedited recording here:

Altogether the Blue Microphones Raspberry could convince me almost completely of itself. At the moment the price is about 230 Euro and is therefore not a bargain. But for your money you get a really small and portable USB microphone that can also be used on a smartphone.

The sound is great, only a better workmanship of the rubber feet and the Micro-USB connection I would wish for. Maybe I had a Monday device here, but the feedback will be forwarded to Blue Microphones in any case and hopefully fixed in the future.

If you’re looking for a microphone to take with you, the Blue Raspberry is definitely a good choice, I can only recommend the microphone because of its good sound.

If you're looking for a microphone to take with you, the Blue Raspberry is definitely a good choice, I can only recommend the microphone because of its good sound.