We from Basic-Tutorials.de have already held the one or other gaming headset in our hands. Be it on fairs or for our test reports. Everything was also already included in the price. Cheap Asian junk or high-end devices of well-known manufacturers. Now the EKSA E900 arrives with us, which is currently priced at 40 Euros – in the normal price range, as one can claim. We’ll see how the E900 performs.

Should you want to put the headset on: Yes, the packaging is very spartan and the box is very light. But the headset is included. In the box the headset is packed in a leatherette bag. The rest is in simple plastic bags in the box. The removable microphone is included, as well as a Y-cable, since the headset itself has only one 3.5 mm connector.

Due to the weight of the headset it can be assumed that only plastic was used for the construction. At first glance, the workmanship makes a solid impression, even if the spiral-shaped cable to the auricle looks very cheap again. The ear cushions are well made, but the artificial leather makes you sweat a lot under the over-ears. The padding of the headband is also well made, but the imitation leather stretches completely over the top, which makes the headset look cheap. But the headset is more valuable because of the metal ear cups.

Another point of criticism is the Y-cable and the media control, which is located directly on the cable of the E900. Both seem very cheap. Especially the switch for muting the microphone makes a very rickety impression, as if it would soon give up the ghost.

The design of the EKSA E900 is kept very simple. Only a few red accents, such as the spiral-shaped cables, the ear cup holder or the three lines on the ear cups stand out from the headset, which is otherwise completely black. On the box, the three stripes on the ear cups seem to glow, so there is probably still a USB version of the headset where this is the case.

It should be mentioned directly that the author has a real thick head, in the truest sense of the word. Even the greatest setting of headsets can sometimes reach its limits. This is unfortunately the case with the EKSA E900. The gaming headset is quite generous in size adjustment, but in the largest setting it doesn’t really sit well on the ears. Longer gaming sessions are unfortunately not really pleasant. Glasses wearers shouldn’t encounter any problems here, though.

Then there are the leatherette ear pads, which do not really contribute to comfort and cause sweaty ears.

The sound of the EKSA E900 is very bass-heavy. Even with other headsets, it often happens that there is too much bass in the ears, but here it was really extreme – at first. You really have to get used to the sound, because everything is actually quite balanced. Even if the bass as well as highs and lows are too powerful, the E900 is convincing here. Ambient noises can be filtered well, locating enemies in shooters is easy. And it doesn’t matter whether the headset is used on a PC or, for example, on a PlayStation 4.

For currently around 40 euros, you can get the EKSA E900 for a really narrow price. But the headset is worth it, at least in terms of sound and recording quality. One must honestly say that the general quality of the headset is rather mediocre. The workmanship is right, but the materials used simply look cheap.

A narrow course often means that the quality suffers, but with the EKSA E900 you get a really good headset – at least in terms of sound. 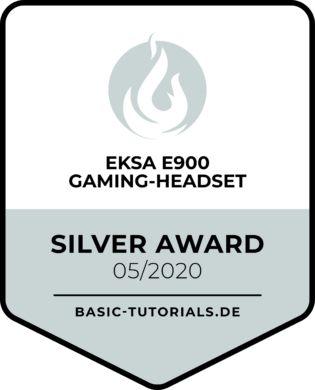 Quality of the used materials is not really convincing, but the sound and recording quality and the price is right!