The Dutch company Philips has provided us with the 49-inch curved monitor 499P9H, one of the largest monitors currently available. The expensive Philips 499P9H* in 32:9 format offers with its resolution of 5120 x 1440 pixels the identical resolution my two 27-inch monitors from the tests of Kolink Chimera monitor-holder and the Arctic Z2 Pro (Gen 2) monitor-holder together. The strengths and weaknesses of the Philips 499P9H monitor and a recommendation as to whether it is worth switching from two 27-inch monitors to a 49-inch curved monitor are explained in the following test.

Scope of Delivery of the Philips 499P9H

The scope of delivery of the Philips 499P9H already makes it clear that the monitor is in the premium range. In contrast to other manufacturers, who often save on connection cables, the Philips 499P9H comes with the following cables:

In addition, the Philips 499P9H package contains a short manual, a detailed manual, drivers and a standard color profile.

Assembly of the Philips 499P9H

Due to the relatively high weight and size of the panel, the Philips 499P9H should be mounted by two people. When opening the packaging, make sure that it is placed on the correct wide side. Only the heavy metal stand can be removed.

The subsequent mounting of the stand to the display is not done by a simple click fastening, but requires four screws due to the high weight of about 11 kilograms. It should be noted that the display must not be placed on the desk with the picture facing downwards, as this leads to high loads on the outer edges due to the inclination, which in extreme cases can damage the Philips 499P9H during installation.

Design and Workmanship of the Philips 499P9H

At first glance, the Philips 499P9H stands out for its sheer size. The diagonal of 49 inch respectively 124 centimeters makes my normal setup of two 27 inch monitors appear small, although the displayed resolution is identical. The Philips 499P9H almost completely fills normal sized desks of 120 centimeters in length.

Otherwise, the design is rather reserved, which is probably due to the fact that the company Philips with 499P9H wants to appeal primarily to professional users. RGB lighting, eye-catching logos or colour accents, which have now become standard on gaming monitors, are therefore not found on this monitor.

Instead, the Philips 499P9H convinces with its excellent workmanship, in which the metal stand stands out again. The rather thin plastic display frame also looks high-quality, but seems to favour electrostatic charging, as shown by the fact that the monitor is a true dust catcher.

It’s positive to note that the power supply of the Philips 499P9H is housed in the case of the monitor. In combination with the downward split stand, through which cables can be routed, this makes for a tidy desk.

Ergonomics of the Philips 499P9H

The Philips 499P9H allows you to adjust all mechanical adjustments to optimize the desired ergonomics precisely and effortlessly, despite its high weight and size. The monitor can be steplessly tilted 20 degrees in both directions. The tilt can also be steplessly adjusted by 5 degrees forwards and 10 degrees backwards.

During adjustment, the solid metal stand remains in the same position on the desk and only the upper part of the stand moves. The height can be adjusted by a maximum of 13 centimetres. At the lowest level, the Philips 499P9H is almost directly above the desk. Of course, the monitor doesn’t offer a pivot function due to the curvature and the unsuitable format. In my opinion, this is not necessary anyway because of the large screen.

Technology and Image Quality of the Philips 499P9H

The Philips 499P9H was also technically more than convincing in our test. Disturbing coil whine or other background noises did not occur during the entire test period.

Due to the 49-inch diagonal, Philips uses a VA panel with a white LED backlight for the 499P9H, which is probably due to the fact that IPS panels are not yet available in this size. Irrespective of the light irradiation, the Philips 499P9H’s matte display and matte frame meant that almost no annoying reflections could be noticed.

The picture quality is also brilliant in all situations due to the very high resolution. In order to achieve a realistic color representation, the included color profile should be installed. Only the contrast ratios and the black value give slight points for criticism, which is, as usual, due to the VA panel. In the showcase disciplines of the Philips 499P9H, which are clearly the multitasking of typical office work, this doesn’t have a negative effect, however.

Gaming features of the Philips 499P9H

The refresh rate of the Philips 499P9H monitor at native resolution of 5120 x 1440 pixels is 60 Hz, except when using the DisplayPort which supports a refresh rate of 70 Hz. According to the monitor’s data sheet, the response time (gray-to-gray) is 5 ms. In addition there is the so-called Overdrive, an acceleration option in the steps “Off”, “Fast”, “Faster” and “Fastest”, which is deactivated by default and is supposed to provide a smoother display for fast games on request.

The gaming properties of the monitor were tested with the rather slow real-time strategy game StarCraft II and the shooter Counter-Strike: Global Offensive.  It should be noted that the following points represent a purely subjective evaluation and were evaluated on the basis of the personal opinions and experiences of two testers with the 49-inch giant.

StarCraft II can already be played at 60 Hz and completely deactivated Overdrive without restrictions. Compared to a 120 Hz monitor on the Philips 499P9H, CS:GO feels like there is a significant delay with these settings, which has a negative effect on the gaming experience, especially in fast scenes.

The change from Overdrive “Off” to “Fastest” is clearly noticeable. The gameplay in CS:GO is more fluid and inputs that previously felt very delayed are now much more responsive. Due to the refresh rate of 60 Hz, the Philips 499P9H can of course not keep up with gaming monitors that offer 120 Hz or even 240 Hz.

The change to a connection via DisplayPort and the resulting 70 Hz instead of 60 Hz refresh rate are again clearly noticeable and make CS:GO appear a bit more fluid. Casual gamers who mainly use their monitor for work or multimedia applications should be happy with this setting.

It should be noted that the Overdrive “Fastest” setting subjectively reduces the image quality slightly. It should therefore be used for fast games. All other application scenarios achieved the best display quality during our test with the Overdrive setting “Fast”. The change from 60 Hz to 70 Hz, on the other hand, only showed advantages and should therefore always be used if a DisplayPort is available on the notebook or computer.

Features of the Philips 499P9H

The other features of the Philips 499P9H are also convincing. In the upper display frame there is an integrated webcam that can be extended by pressing the case. The 2-megapixel camera supports video telephony in addition to Windows Hello login and has two LEDs that indicate whether the microphone or camera is recording.

The two integrated loudspeakers of the Philips 499P9H with 5 watts each made a good sound impression compared to other monitors in the test. This is mainly due to the enormous size of the monitor, which enables an audible stereo sound. The connection options for audio signals are also very diverse with USB-C, HDMI and DisplayPort. The monitor also has a 3.5 mm jack for headphones, which can be used in the office to avoid disturbing colleagues.

Due to its size, the Philips 499P9H is predestined for use as a multitasking monitor. It is possible to halve or quarter the monitor with Windows 10. In the test this option proved to be very useful, because it is possible to position important elements in one half and to move unimportant windows into the other half. The use of the complete monitor without subdivision was often less practicable in everyday life, since despite the 1800-R curvature, the entire screen area cannot be kept in view.

Alternatively, two end devices can also be connected in parallel, each using half of the screen. Thanks to the integrated KVM switch, it is possible to switch between computers at the touch of a button.

The Philips 499P9H is an extremely well processed monitor that makes work child’s play, especially when multitasking because of its large image. Only the VA panel ensures that there are slight weaknesses in the picture quality, which are hardly noticeable in everyday life.

In my opinion, people who are looking for a monitor that is mainly used for gaming and not for working should wait until similarly large devices are also available with a 120 Hz panel. The price for the Philips 499P9H is more than reasonable and therefore it gets the Gold-Award from us. 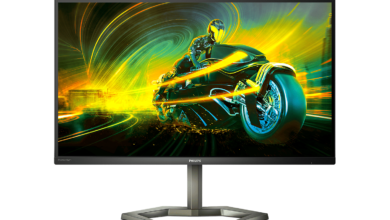