With the Sennheiser GSP 550 gaming headset, we have tested a device that we approached with high expectations. While the vast majority of gaming headsets are in the upper two-digit euro range, Sennheiser is calling for a price of 250 euros for the GSP 550. Interested parties can expect a lot from this device if it is not absolutely overpriced. Although the price does not necessarily imply inner values, we have also been guided by this idea. So the GSP 550 has undergone an extremely rigorous test – after all, you want your money well invested.

Sennheiser relies on shatterproof plastic for the tested headset. In principle, this choice of material for a gaming headset is hardly objectionable. The fabric is stable and yet not too heavy. The joints of the headset are cast out of aluminium, which we noticed very positively in the test. They increase the weight only minimally, are at the same time very robust and function perfectly. The microphone is located on the left auricle and can be folded up. It is quite massive and differs clearly from the microphones of other gaming headsets. The extent to which this is optically positive or negative cannot be generally determined. It certainly didn’t bother us in the test.

Sennheiser proves that it can select high-quality materials and process them excellently. In terms of design, the manufacturer also proves that it understands the target group – the headset is mostly black, but is loosened up by olive green parts that give it a light army look. In the gaming area, the look should go down well.

The cable contains an inline control for activating or deactivating the Dolby sound. In addition, the volume can be controlled directly via a rotary knob on the right ear cup. The rotary wheel is stepless, which we like very much. That’s how you don’t hear a clack in your ear when you’re pretending. However, it is relatively stiff. There is no control for the microphone, but it is automatically muted when you fold it up. This can be heard by clicking.

Overall, we rate the workmanship and design very positively. We find the headset appealing and have noticed a flawless workmanship with an outstanding choice of materials.

The headband is covered with textile on the inside so that it sits comfortably on the head. The length can be adjusted as desired. The room for manoeuvre is very large. People with extremely small heads as well as true thick skulls will surely find a suitable attitude here. The opening of the headband, which counteracts excessive sweating, was also extremely positive. Ordinary headsets get wet and dirty after a long period of wearing. This will probably not be the case with the GSP 550, as air can constantly penetrate to the head through the opening.

The opening of the headband is not only used for ventilation, but also to operate two sliders. This allows the headset’s contact pressure to be adjusted – depending on whether you prefer a firm or loose fit. We liked this innovative solution very much, even though the “loosest seat” could have been a little looser. The contact pressure of the headset is therefore comparatively high.

Also the ear pads could convince us. They are above average in size, which leads to the fact that they should fit even with truly huge ears. The upholstery is tight without uncomfortable pressure. The joint mechanism already mentioned at the beginning, which was cast out of aluminium, also provides further adjustment options. He convinced us in the test. If the headset is to sit very tightly, this can be easily achieved. Even those who like it more relaxed will quickly find a suitable setting. Spectacle wearers particularly benefit from the very open adjustment options.

Of course, we have also dedicated ourselves to the central functions of the headset. First, it should be noted that Sennheiser offers several sound modes. In addition to the standard mode, there is a music mode, an e-sport mode and a game mode.

We were dissatisfied with the music mode. In this mode, the bass seemed to be loud and booming, which might be nice for some songs, but absolutely counterproductive for many. The idea of implementing a music mode is perhaps a nice one, but in practice it’s a rather ludicrous one, since the individual music genres and their sub-genres and their individual pieces of music, which perhaps cannot be meaningfully classified, differ in such a way that a single mode will never be able to do justice to the vast number of very different pieces of music.

We liked the e-sports mode better. The bass is largely contained here, which led to good results in the test. In game mode, on the other hand, the bass is raised again so that everything sounds deeper and duller. This may work sometimes, but in many cases it does not.

In normal mode the bass is also very dominant. Usually this is not noticeable in a negative way, but with deep and loud tones, which occur in games and movies for example with shots, explosions and the like, the bass sometimes becomes unpleasantly dominant. Apart from this weakness, we have nothing wrong with him. In the mid-range, which should be of particular interest to music and film lovers as well as Discord and Co, the headset is fully convincing. The middles are balanced and differentiated. The same can be said about the heights. Here, too, we were very satisfied.

The headset is capable of reproducing surround and Dolby sound, which most users should be happy to hear. We were really enthusiastic about these two sound effects in the test. The GSP 550 clearly outshines many other headsets in this respect. However, this should be deactivated for voice transmissions.

We noticed the microphone positively in the test. Due to its orientation and shape, it hardly picks up lateral tones, which is an advantage in gaming. The voice of the speaker is transmitted well and clearly. We rate the noise cancelling offered, which can be activated in the software, as average. Noise is largely eliminated. The microphone is well suited for ordinary conversations. But hear for yourself:

The associated software can be obtained free of charge via the Internet. The installation is done enormously fast. Afterwards some settings can be made in the software. The three presented profiles can be activated or deactivated here. Noise cancelling and surround sound can also be switched on and off here.

The software does not offer much more – but more is not necessary. The software is designed in such a way that quick orientation is possible without any problems. If you want to do without additional settings, you can also use the headset without any software at all. In principle, it is ready for operation immediately after connection.

With the GSP 550, Sennheiser presents an exceptionally expensive gaming headset that scores with its excellent workmanship, attractive design and excellent wearing comfort. The sound is also convincing over long distances. The only real drawback is the bass pushing into the foreground. The three modes that can be set in the software are hardly convincing. Only the E-Sport mode is acceptable. Even in normal mode, the bass is unpleasantly conspicuous – but much less powerful than in music and game mode. All in all, the sound is still of high quality. An above-average microphone and high-quality, easy-to-use software complete the package.

In our opinion, the GSP 550 from Sennheiser is certainly an above-average gaming headset, which is quite convincing in practice. It easily outshines many competitors and is well worth its price. 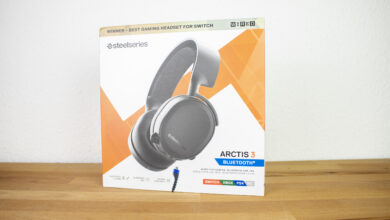