The CES is also always a trade show where numerous new notebooks are presented. This was the case for all manufacturers and naturally also applies to Acer, which has two new high-end models up its sleeve with the Acer Predator Helios 16 and Helios 18.

They are the manufacturer’s most powerful gaming notebooks to date and come in a completely revised design. They are equipped with the latest HX processors from Intel’s 13th generation, either the Core i9 or Core i7, as well as a graphics card up to NVIDIA’s GeForce RTX. 4080 notebook GPU (MGP up to 165W).

This should definitely ensure an absolute top performance in the latest games. In addition, there is up to 32 GB of DDR5-4800 RAM and up to 2 TB of PCIe Gen4 NVMe SSD storage space.

Strong displays with up to 240 Hz

The Mini LED panel supports over 1,000 nits of peak brightness with a high contrast ratio of 1,000,000:1 and 100% coverage of the DCI-P3 color space for rich, vivid colors. At the same time, the mini LED display features over 1,000 local dimming zones to enhance the contrast ratio and image.

On the back, in addition to a few ports, there is an RGB light bar that runs above the rear vents. The new design is complemented by a mini LED backlit keyboard with 1.8 mm key travel and anti-ghosting N-Key rollover. The per-key RGB backlighting has been redesigned to provide bright, even colors smooth, dynamic lighting effects.

Using the mode button, you can quickly switch to gaming mode to access maximum power. The PredatorSense button lets you access the corresponding app for things like customizing the RGB lighting and more.

The Predator notebooks are equipped with the Intel Killer E2600 Ethernet controller and support the Intel Killer Wi-Fi 6E AX1675 frequency band. This is joined by a wide range of ports with USB 3.2 Gen2, HDMI 2.1, USB Type-C Thunderbolt 4 twice and a Micro SD card reader.

For external imaging, the manufacturer offers the two new Predator X45 & X27U gaming monitors. They both rely on an OLED panel, with the X45 boasting a UWQHD resolution (3,440 x 1,440 pixels) and 800R curvature.

It also supports 98.5% of the DCI-P3 color gamut for realistic images. Equipped with DisplayPort 1.4 and two HDMI 2.0 ports, it is also TÜV Rheinland EyeSafe certified. HDR10 is also supported, and the maximum brightness is 1,000 nits.

Both the Predator X45 and Predator X27U feature a refresh rate of 240 Hz and a pixel response time of up to 0.01 ms combined with AMD FreeSync Premium technology.

They also feature KVM switching, which allows you to quickly switch between desktop and notebook and easily continue using your mouse and keyboard. Furthermore, both Predator monitors are equipped with a USB Type-C port, which can be used to charge notebooks with up to 90W, for example. 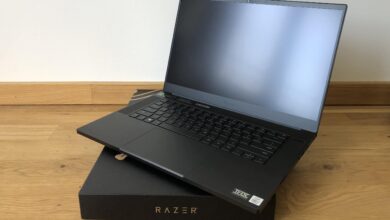