Asus presented a special concept motherboard at Computex 2019 in the company’s home country to mark the company’s 30th anniversary. The Asus Prime Utopia stands out due to its futuristic appearance, which is striking due to the 7-inch OLED display and the interchangeable I/O modules.

The Prime Utopia will probably never come onto the market as a pure concept, but serves only to show what is already technically possible at present. Instead of the usual PCIe slots, Asus has installed a 7-inch display with touch support at this point that shows information about the temperature and fan speed. BIOS settings can also be entered directly via the display.

Graphics cards are installed on the back of the Prime Utopia. According to Asus, the unusual arrangement ensures better cooling and thus lower temperatures throughout the system. In addition, the motherboard has a pre-installed water cooling for the voltage converters and four M.2 slots with fans and heat sinks. Asus’ patented Hydra Cortex Fan Header enables independent control of four fans.

Asus also offers an innovative connector system for the I/O panel on the rear, which enables individual connections to be exchanged. For example, a user can modify the number of LAN or USB ports as needed.

According to Asus, at least the Hydra Cortex fan header should come onto the market. The company is currently working with its first partners on the development of compatible fans. 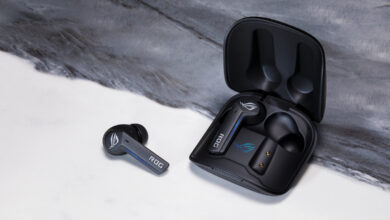