Dell unveiled the latest version of its most powerful 13-inch device at CES 2022. The XPS 13 Plus does not only want to score with a modern look, but also with a lot of performance. Furthermore, the popular PC hardware manufacturer has presented a monitor that is supposed to be ideal for video conferencing. We’ll take a detailed look at the new introductions.

Dell does without frills

According to Dell, the design of its XPS 13 Plus follows the guiding principle “less is more”. According to the motto, the notebook comes in a minimalistic guise, but wants to score with a lot of performance under the hood, which is typical for XPS. The slim dimensions in the style of an ultrabook are particularly appealing.

The flat keyboard and the invisible touchpad provide a clean and extremely modern look. You can choose between two different colors for the case. Besides a light platinum-gray, you can also go for a darker model in graphite-gray.

At the heart of the XPS 13 Plus are the powerful 12th generation Intel Core processors. Thanks to sophisticated ventilation via larger fans, you shouldn’t be able to hear any noise even during resource-hungry applications. According to Dell, the battery of the XPS 13 Plus has also been upgraded. It should not only last much longer. On top of that, it now offers the option of a quick-charge function. Almost 80 percent of the battery is supposed to be recharged after just 60 minutes. Dell has also improved the picture and sound of the notebook so that entertainment is not neglected.

In particular, the almost borderless display is already a real feast for the eyes in the published photos. The hardware expert claims to have saved superfluous layers in the display of the XPS 13 Plus. The end result is a better picture quality, but unnecessary weight is eliminated at the same time. A total of four speakers are supposed to provide good sound. Sustainability also plays a big role at Dell in the meantime. The company promises that they pay special attention to producing as little waste as possible in the manufacturing of the XPS 13 Plus. This does not only apply in the factory, but also at the user’s home. Thus, Dell wants to package its XPS 13 Plus in a recyclable material.

The topic of video conferencing is now firmly anchored in the working world, not least due to the Corona pandemic. So it’s hardly surprising that more and more manufacturers are jumping on the bandwagon. Dell is one of them. With its UltraSharp 32 4K Video Conferencing Monitor, the manufacturer wants to deliver exactly what the name promises – the perfect screen for online meetings. Dell installs its UltraSharp webcam in the monitor itself, which takes care of image transmission. Beyond that, the screen scores with special dual array microphones that are supposed to ensure echo suppression. Thanks to integrated speakers with 14 watts of power, you can confidently do without separate speakers.

Given the many different features, it’s hardly surprising that Dell has obtained special certification for Microsoft Teams. However, we also like the presented monitor’s looks. Similar to the XPS 13 Plus, the manufacturer again relies on a restrained, but quite classy design. Since the look is rather inconspicuous, the screen should fit perfectly in the classic office as well as in the home office. Dell wants to round the whole thing off with a number of different connectivity options. These are said to “transform the UltraSharp 32 4K Video Conferencing Monitor into a true productivity center.”

It won’t be long before the new premium notebook and video conferencing-focused monitor are set to launch. Dell, for example, plans to launch its XPS 13 Plus in stores this spring. Buyers should then have the choice between the two operating systems Windows 11 and Ubuntu 20.04. The Dell UltraSharp 32 4K Video Conferencing Monitor is supposed to go on sale on March 29. Unfortunately, Dell has not yet commented on prices.

Corsair Voyager a1600: Powerful notebook for gamers and creators presented 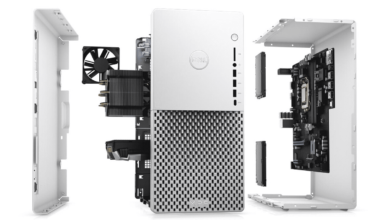 Dell unveiled the latest version of its most powerful 13-inch device at CES 2022. The XPS 13 Plus does not only want to score with a modern look, but also with a lot of performance. Furthermore, the popular PC hardware manufacturer has presented a monitor that is supposed to be ideal for video conferencing. We’ll … (Weiterlesen...)