Glorious wants to launch a new mouse whose specs already read very well on paper. However, the company apparently also wants to rely on its controversial concept of the so-called Group Buy for its latest coup called “Series One Pro”. This questionable sales model already gave many customers reason to grumble with the Glorious Model O Pro.

A wolf in sheep’s clothing

If you take a look at the first pictures of the Series One Pro, it looks surprisingly restrained for a gaming mouse. This is not only true for the white-grey color design. Its dimensions also correspond more to a compact office mouse. But under the hood there seems to be a real guarantee for great gaming fun.

Quite obviously, Glorious is not reinventing the wheel here. After all, the wireless mouse is clearly reminiscent of the Model O Pro, which is still scheduled for launch in the summer of 2022. This is not only true for the looks, but also for the technology. We have compared the data in a table for you.

The features are almost like two peas in a pod and leave hardly anything to be desired by demanding gamers. Especially the low weight of 50 g (Series One Pro) respectively 55 g (Model O Pro) is really impressive. Other manufacturers with models in a similar form factor can hardly keep up. On top of that, the competition usually relies on a so-called Honeycomb design, which manifests itself in holes that have the eponymous honeycomb shape.

This may save weight, but it’s a matter of taste when it comes to “look and feel”. Glorious takes a different approach and relies on closed lids. Even more exciting is the technology under the hood. Many other ultra-light mice lack the high-end technology that is offered here. Accordingly, both rodents from Glorious should probably do well on the market.

However, parallels between the two wireless mice are not only evident in the design and features. On top of that, Glorious also wants to rely on the highly controversial Group Buy for its Series One Pro. Customers are supposed to buy a mouse that is actually not even ready for the market yet. What is almost reminiscent of a Kickstarter project doesn’t really suit an established PC expert like Glorious. The manufacturer’s intention behind this is to minimize the drop rate when launching a new product. In order to increase the pressure among the clientele, the call for a Group Buy is valid for a limited time. Those interested in the lightweight, wireless gaming mouse should pre-order by July 13, 2022 at the latest.

However, should you just go for it here, the purchase can turn into the proverbial pig in a poke in the worst case scenario. After all, the obligatory possibility to inform oneself about the suitability of the gaming mouse in advance via reviews or other instruments is missing. However, Glorious’s concept, which is used for the two wireless mice, is not really new. After all, the company already used the support of its community in the past with the so-called “Forge models”.  However, these were really niche products like a pink variant of the Model O. Apparently, this was so well received by the community that Glorious now wants to use Group Buy for traditional products for the broad gamer masses.

Of course, Glorious has already been confronted with the questionable Group Buy. In doing so, the company argues as if Model O Pro and Series One Pro are also niche products. According to the company, it wants to wait and see how high the customer demand for the Series One Pro will be. In the worst case, the featherweight mouse might not even go into production. The company is once again building up pressure here, as many interested parties will see this as a reason to pre-order the gaming mouse. The company made a statement to its community on Reddit.

Yes, this is a group buy. That means it is open for a limited time, not a limited order quantity. BUT it will be available in select other channels depending on our region and partners. But later this year. The whole idea behind Forge is not “buy now or tough luck / FOMO” – We see it as our way to release products that we wouldn’t otherwise be able to make. Some of them might be more “niche” and developed based on community feedback. There is risk behind every product for us as a company. That’s the sad truth.

We would love to do a lot more, but sometimes we can’t. This is just the beginning of Glorious Forge. You will most likely see more “experimental” products in the future. But also products that we will carry under the Glorious brand from now on. Please don’t worry that we will only run this business model. We know it’s not for everyone. Think of it as a nice addition to create products that normally would never exist.Glorious on Reddit

Glorious must really be wondering if this whole thing could backfire. After all, there’s nothing worse than alienating your own fanbase. So the question marks in the minds of many Glorious fans are getting bigger, whether behind the Group Buy principle could possibly be just pure marketing. The reason for this is a look at the Model O Pro. Although the original plan was to have a limited pre-order period until June 7, 2022, it will probably be available at the company’s partner retailers starting in August. A look at Caseking makes that clear. Here you can actually already pre-order the once so exclusively courted mouse. Are you currently looking for a new gaming mouse? Then take a look at our reviews of the Speedlink IMPERIOR and the ROCCAT Kone XP. 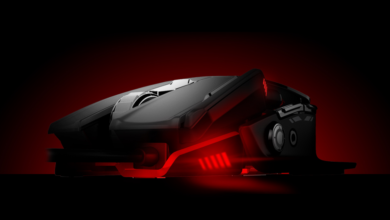 Glorious wants to launch a new mouse whose specs already read very well on paper. However, the company apparently also wants to rely on its controversial concept of the so-called Group Buy for its latest coup called „Series One Pro“. This questionable sales model already gave many customers reason to grumble with the Glorious Model … (Weiterlesen...)