After Honor gave its MagicBook 14 notebook an update with Intel processors last year, it relies on AMD in the new model year. The Honor MagicBook 14 2022 is equipped with AMD Ryzen chips from the 6000 series, weighs only 1.55 kg or comes with a 3:2 display.

Presumably in terms of energy efficiency, the new Honor MagicBook 14 2022 relies on AMD Ryzen 6000 series CPUs. The new 14-inch laptop is offered with either the AMD Ryzen 5 6600H, which offers six CPU cores with clock speeds of up to 4.5 GHz, or the faster AMD Ryzen 7 6800H with eight cores and up to 4.7 GHz.

Both models share the 16 GB LPDDR5 working and 512 GB SSD system storage. Graphics calculation is performed internally in both notebooks via the installed AMD Radeon graphics unit, which is clocked with 1,900 MHz.

In combination with the efficient processors and a 75 Wh battery, the new MagicBook 14 2022 should achieve a runtime of up to 20 hours. Up to 17 hours of video playback in Full HD and around 14 hours of daily office work should be possible.

Charging is quite fast via USB Type-C with a speed of 65 watts. Just 15 minutes on the mains should be enough for the notebook to last three hours of typical workload. The battery is fully charged in 100 minutes.

For energy efficiency reasons, Honor’s decision to rely on AMD processors here seems extremely smart. After all, the reverse course of the former parent company Huawei resulted in a significantly reduced battery life for the current Matebook 16s (our review) and Matebook D16 (our review) notebooks, which switched from AMD to Intel in the current model year.

Display and other features

In the new Honor MagicBook 14 2022, the manufacturer relies on a 14-inch display that comes in a 3:2 format. It offers a resolution of 2,160 x 1,440 pixels and 185 ppi accordingly. The maximum contrast is 1,500:1, while the display reaches a maximum of 300 nits typical brightness. The sRGB color space is also supposed to be completely covered.

Built-in are also two speakers and two microphones, while the webcam resolves in 720p. Honor also installs a fingerprint sensor in the power button, while NFC, Wi-Fi 6 (IEEE 802.11a/b/g/n/ac/ax) and Bluetooth 5.2 are offered.

The new Honor MagicBook 14 2022 will initially launch exclusively on the Chinese market. Here, the price starts at 5,199 yuan, which is the equivalent of about 754 euros, for the variant with AMD Ryzen 5. The top model with a more powerful CPU and otherwise identical features is priced at 5,699 yuan (around 826 Euros). It is not yet clear if and when the MagicBook will be available in Germany. All details can be found on the product page of Honor. 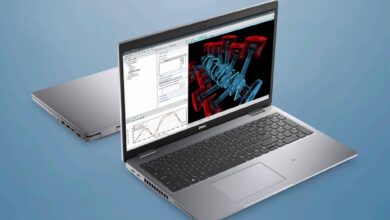 Workstation for beginners from Dell: Precision 3561