With the headphones Real, Real Blue and Real Blue NC Teufel has brought its new headphone generation onto the market, which is supposed to score with first-class sound at a relatively low price. I have tested the Real Blue NC for you, the models of the series differ only in the features Bluetooth and Noise Cancelling (NC). The sound is the same on all models.

The packaging of the Real Blue NC comes, as usual from Teufel, beautifully designed and without frills. A glance into the red cardboard box reveals its contents: The headphones are in a sturdy hard case with zipper. This looks chic and is high quality processed. In addition to the headphones themselves, it also offers space for a small accessory bag. This is simply attached to the fluffy inside of the case using the Velcro principle. So you always have everything you need with you. Otherwise a manual in German language is enclosed.

Let’s now turn to headphones: at 260 grams, it’s rather light, which is especially pleasant for mobile use. The main materials used are plastic and imitation leather. But that’s not bad, because everything is of high quality and the plastic doesn’t feel cheap at all. Only the artificial leather unfortunately smells a bit like chemistry, but the smell evaporates with time.

The ear cups are made of soft memory foam covered with artificial leather. This lies very soft on the ears. In the auricles there are red fabric nets, which look chic and represent a nice coloured detail.

The accessories of the Real Blue NC include an AUX cable, a micro-USB cable and an aircraft adapter. The AUX cable is rubberized and has an inline remote control with which the music can be paused and Siri or Google Assistant can be started. The only button of this remote control rattles a bit while shaking, but the pressure point is okay. The 3.5 mm plugs of the cable are very narrow and gold-plated. The Micro-USB cable is also rubberized.

All in all, the scope of delivery with hardcase and all necessary accessories is relatively extensive and the workmanship, except for the initially somewhat unpleasant smell, is very good. The more so as Teufel rather renounces noble materials and other comfort features with the headphones of the Real series, which are rather cheaply priced for their sound quality, in order to be able to focus fully on the sound.

When I first touched down, I first noticed the light weight of the Real Blue NC. It’s a little heavier than my open wired headphones, but when you consider how much technology is built into the Real, it feels surprisingly light.

The contact pressure, the pressure with which the auricles are pressed on the head, feels higher to me than with many other headphones. It’s no big deal, but it’s a little annoying to wear for long periods of time. But what I like very much is the material of the auricles, because it shields sounds from the outside well, but you don’t sweat under it.

The comfort is relatively good, but for longer sessions I prefer my open devils Aureol Real.

A practical feature of the Real Blue NC is active noise suppression. This works by using several microphones inside and outside the auricles. These record interfering noises which are neutralized by emitting a reverse wave signal. This works particularly well for even noises, such as humming in the plane or train. Irregular noises such as conversations are less well shielded.

Noise cancelling on the Real Blue NC can be activated simply by using the switch on the left ear cup. It works very well and is a pleasant feature especially on the road. Only in quiet musical passages is a slight noise perceptible. Nevertheless I’m very satisfied with the noise cancelling, the extra charge compared to the Real Blue without NC is especially worthwhile if the headphones are used a lot on the road. If you only use the Real at home or in a quiet environment anyway, the version without noise cancelling is also sufficient.

Teufel has come up with a special concept for the operation: the outside of the right ear cup is touch-sensitive. Various touch gestures can be used in Bluetooth mode to perform actions such as play/pause, volume and next/previous track. This actually works quite well, but the surface is very touch-sensitive and sometimes the gestures are misinterpreted. Nevertheless, gesture control is very intuitive once you’ve made friends with it.

The Real Blue NC fits perfectly into the included hardcase.

Now let’s get to the sound: The first time I test the Real Blue NC with the Aux cable on my external sound card, the sound is convincing. It sounds very powerful and direct with a concise, but not too intrusive bass. The sound is rather warm, but nevertheless rich in detail.

In general, the Real Blue NC is suitable for all styles of music, but pop and rock songs in particular benefit from the powerful bass and warm sound. In songs like Daft Punk’s “Get Lucky” the bass forms a solid foundation without drowning out the mids. Rock and metal fans will also get their money’s worth with the Real Blue NC: In songs like “Wait and Bleed” by Slipknot the drums are clearly audible, guitars and voices sound full and powerful.

The Real Blue NC is a real all-round talent. With its balanced sound it is also suitable for rather bass-heavy songs, but for example also for quiet songs with acoustic guitar and classical music. Here the bass stays in the background, unlike many cheaper headphones, which are advertised with a particularly powerful bass.

Also via Bluetooth the sound quality is very good and the maximum volume is more than sufficient due to the low impedance. Thus nothing stands in the way of hearing pleasure also on the way.

The playback time of the Real Blue NC with one battery charge is very long thanks to the large Li-Ion battery. Depending on whether Bluetooth and/or Noise Cancelling is activated, Teufel indicates a running time of 23 to 60 hours. The latter are the guideline value for cable operation with activated noise cancelling.

With the Real Blue NC Teufel has again managed to bring a real HiFi headphone for relatively little money on the market. It convinces with its chic appearance, innovative operating concept and above all with a great sound that is second to none in this price class. Thanks to the long battery life and features such as Bluetooth and active noise cancelling, it is ideal for on-the-go use, but can also be operated at home. Overall, I am very convinced of the Real Blue NC from Teufel. Anyone who is unsure whether the Real is the right choice will benefit from the eight-week trial phase. During this time you can return the headphones if you don’t like them.

Great sound at a fair price!

With the Real Blue NC Teufel shows again that HiFi sound is not only a question of budget. An all-round convincing product. 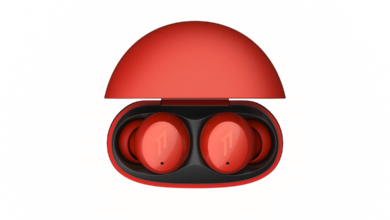