The manufacturer Alpenföhn has long been a well-known manufacturer of CPU coolers and case fans. Especially with the names of the products Alpenföhn is able to attract attention again and again. Many coolers carry the name of well-known European mountains such as the Brocken. Since the first revision the Brocken belonged to the more performant coolers of the line-up. Two years ago, the third revision in the form of the Brocken 3 was introduced. In order to improve the cooling performance even more and to put a scoop on it optically, Alpenföhn equipped this cooler with an additional fan and coloured the heat sink. A distinction has to be made between the Brocken 3 Black Edition and the Brocken 3 White Edition. The price for the black version € 59.98 * and Price not available * must be put on the table for the white version.

In this review you can see how the Alpenföhn Brocken 3 Black Edition performed in our test parcour.

The Brocken 3 Black Edition comes in a very large cardboard box. The box is colorfully printed and contains a lot of information about the cooler and the fans. In addition, both color variants of the cooler can be seen on the cardboard. All information is written in English.

If you unpack the contents inside the box, you will find the heat sink, two fans, a screwdriver, detailed assembly instructions and a box with all assembly accessories (screws, backplate, spacer, bracket, thermal paste). The screwdriver with a magnetized tip is particularly advantageous and should greatly simplify the installation of the cooler. To protect the cooler and the fans from any damage, all components are wrapped in a soft foam.

If you unpack the heat sink, you quickly realize that Alpenföhn has named this CPU cooler appropriately. The 720 g heavy Brocken 3 consists of 32 aluminium fins, five 6 mm heatpipes and a base plate with Heatpipe Direct Touch technology. This means that the heatpipes have been sanded smooth and rest directly on the CPU’s heatspreader. All aluminium fins, heatpipes and the base are glossy black anodized. If you look at the cooler from the side you can see that it is asymmetrical or aligned to the left. This construction should guarantee a high compatibility to high heatspreaders on the RAM modules despite the large fan.

The two included Wing Boost 3 fans from our own house are completely black, have a 4-pin PWM connector with Y switch and rotate at a maximum of 1050 revolutions per minute. The manufacturer has also included eight rubber buffers for decoupling.

As you can see on the pictures, the Brocken 3 Black Edition with both installed fans looks very massive and with a total weight of about 1 kg it weighs a lot. With a height of 165 millimeters, the CPU cooler also has a decent size, which could be too big for one or the other case.

As you can expect from an Alpenföhn product, the processing is very good. The heat sink has no bent fins, there are no sharp edges and also the anodisation of all components is clean.

A test system on a benchtable is used for the review. This allows us to rule out interference factors such as heat build-up in the housing. The test system consists of the following components.

As with all current Alpenföhn coolers, the Brocken 3 Black Edition also uses the RockMount2 mounting system. It is a mounting solution with a solid metal backplate and a frame construction on the front to screw the radiator on. The mounting system is based on the predecessor RockMount1 and has been slightly modified. But let’s start at the beginning.

For our AM4 system, the complete AMD retention module must be removed first. Alpenföhn, in contrast to other manufacturers, also relies on a self-developed backplate for AM4 systems. Four bolts have to be attached to this backplate and locked with “plastic shoes”. The mainboard can then be placed on the backplate so that the bolts can be seen on the front.

The plastic spacers must then be put over all four bolts. Then the mounting frame is put on the spacers and screwed with four nuts. Before the cooler can be placed on the CPU, the heat conducting paste must not be forgotten. In our review we use the Arctic MX-4 as usual and spread it evenly and thinly on the heatspreader.

Then place the CPU cooler on top of the CPU and screw the retaining bracket already attached to the cooler to the mounting frame. Since one of these screws is located directly under the heat sink, Alpenföhn has provided it with a small opening through which the supplied screwdriver can be inserted. If the bracket is screwed on both sides, the last step is to mount the fans. The mounting is done with two clamps per fan directly on the heat sink. The fans also have thin rubber buffers for decoupling.

The assembly of the CPU cooler was very well thought out and designed by the manufacturer. Within a very short time it was done and the CPU cooler is connected to the mainboard.

Even with the fan installed, there is still enough room in all RAM slots for high heatspreaders. However, it must be said that this only applies to motherboards with four or two RAM slots on the right side of the CPU. Platforms with RAM slots on the left side of the CPU may have problems with higher heatspreaders. The same applies to the top PCIe slot on the motherboard. Depending on the position and backplate of the graphics card, this could lead to complications.

The Alpenföhn Brocken 3 Black Edition performs very well in the stress test. Especially at a speed of 50% PWM, the temperature difference to the boxed cooler is almost 50 °C. In addition to the cooling performance, the Brocken 3 has another big advantage: with 600 rpm, both fans are almost inaudible. If you leave the control to the mainboard according to profile, then the fans only rotate at 400 revolutions per minute when idle. It couldn’t be quieter.

With the Alpenföhn Brocken 3 Black and White Edition, the manufacturer has managed to make a very good radiator even better. Due to the white and black anodizing the massive radiator looks good. With a second fan the cooling performance can be improved again slightly. This complete package is rounded off by a very well thought-out mounting system and a clean workmanship.

But we also found a small negative point. Especially on mainboards where the graphics card is in the top slot, there might be problems during assembly. But Brocken 3 is not alone in this cooler category. Complications can also occur with the competition from be quiet!, Noctua etc. on each motherboard.

With a price of € 59.98 * it is not exactly cheap, but offers the buyer a lot and gets a buy recommendation from us. 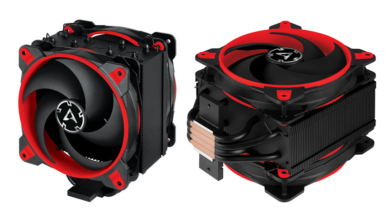