We have already featured the iCUE H170i CAPELLIX from Corsair on our site. Another well-done addition to Corsair’s high-quality AiO lineup. Now there is the iCUE H170i ELITE LCD, which counts as an upgrade of the Elite CAPELLIX-AIO and wants to put a scoop on it. Probably the biggest innovation: a pump housing with an LCD display. In addition, the 420 mm radiator gets new ML RGB ELITE fans with improved airflow and much more. How well the iCUE H170i ELITE LCD does, you will learn in the following test!

The iCUE H170i ELITE LCD comes in a somewhat plain packaging. The product image is shown on the front, with information about the AiO and about the LCD display on the back. Thereby, a cool white cat wearing sunglasses is demonstratively depicted so that ROCCAT gets competition in the cat game – of course, just a little fun on the side. True to the motto “Super Chilled” as it is labeled on the top of the packaging.

First of all, let’s talk about the scope of delivery: apart from the 420mm radiator including the pump block, there is also a Commander Core fan controller to control the three 140mm ML RGB ELITE fans. Furthermore, the various brackets for the different CPU sockets, additional screws and a useful USB header splitter cable are also included. At the same time, everything was packed safely from scratches and damages in foil and cardboard.

To start the review, let’s first take a look at the centerpiece of the package. The matte black pump block has received a clearly visible update with the 480×480 pixel resolution display. But the case has also received a significant update and now has rounded corners. There is also an RGB circle around the display, which can be illuminated later. Small lettering in gray rounds off the exterior. For later installation, the upper part including the LCD display can be removed and a fine layer of thermal paste is applied to the reflective copper base plate. A step that can be saved for later installation. The metal rails for mounting can be pulled out of the pump block without screws and exchanged according to the application.

As far as the radiator itself is concerned, nothing exciting has changed externally, and as far as we can tell, internally as well. Furthermore, the radiator is quite narrow, matte black and on both sides there is still a silver Corsair logo. About the quality standard can be determined only one thing with our specimen: everything is at a near-perfect level. The individual fins are fine and have no dents in the middle as well as at the screw connection points. The two hoses are high-quality sleeved and thus only strengthen our impression. There is also a small blow-off valve on the hoses, for changing the coolant.

Another innovation is the three ML RGB ELITE fans. The new stickers in the middle of the rotor blade are visually striking. These are no longer simply black, but now sparkle chrome in the light. We didn’t notice any changes to the rotor blade itself – size, color and the type of illumination from the center are identical. The surrounding fan case, on the other hand, is somewhat different. This no longer has as many edges and now creates a visually more stable and noble impression. However, these changes do not affect the performance itself.

For an easier installation of the iCUE H170i ELITE LCD, Corsair offers a short video on the YouTube channel Corsair Lab. For the sake of the environment, Corsair deliberately does not include a paper installation guide. If the video itself does not help, there is a QR code on the inside of the packaging’s lid, which takes you directly to the online assembly instructions.

If you follow the video, as we did in our case, you won’t have any problems with the assembly. The steps are clearly described and easy to understand. The fans are firmly attached to the radiator and the cables are connected to the RGB controller.

Positive as well as minimal negative we noticed the mounting of the metal brackets of the pump. These hold without a screw below in a gap on the pump block. The one-time change, as in our case, is therefore super easy and without annoying screws. However, the brackets are a little crazy to us during assembly, when we fixed the first screw – briefly pushed back into position it was then no longer a problem. In our case, we tested the AiO water cooling on the front of our case. You can find out more about our test system now. 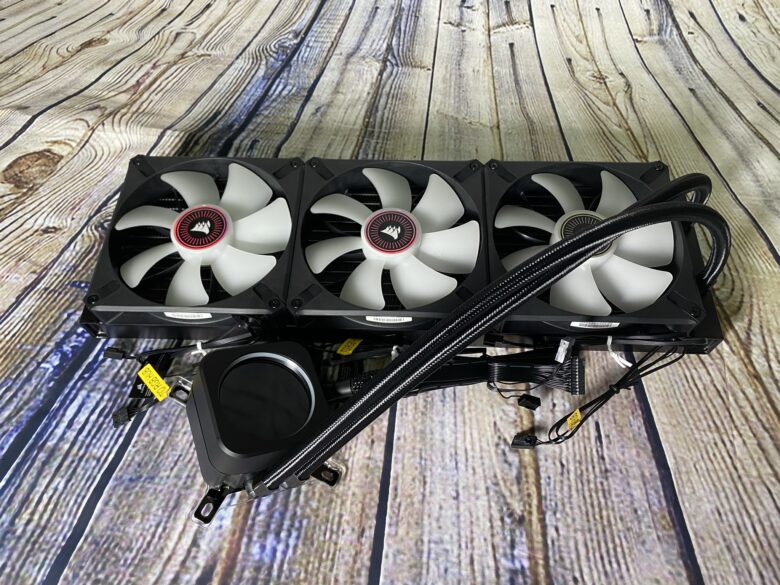 Our test system consists of the following components:

Now that the iCUE H170i ELITE LCD is installed in our system, the power and cooling test can begin. To test this, we loaded the CPU using Prime95 over a 30 minute interval while reading the temperature under load using CPUID Hardware Monitor. At the same time, we used the idle temperature as a comparison value. The room temperature was 22 °C. We also observed the temperature course to avoid sensor readout errors. We repeated this procedure for a total of three times and entered the average values in the table now below.

The collected results look very solid in our eyes. To classify them a bit better, here is a table with other AiO watercoolers we tested in the same system:

During the test, we noticed one thing increasingly – the volume of the pump. In “Intensive” mode, you can hear a distinct low hum, which could be distracting while gaming depending on the position of the computer. However, in the closed ASUS ROG Strix Helios, the volume of the hum dropped significantly – so a good insulation solves the problem to a large extent. If we may recommend one mode, it is definitely the “Balance” mode. Here, the volume drops significantly and the CPU remains more than cool enough. Finally, something about the fans. Due to the 140 mm, the fans don’t have to spin as fast as the 120 mm fans to get the same performance. An advantage you have to consider with a 420 mm AiO water cooling and at the same time we can only recommend.

In the last chapter, we finally examine the LCD display in operation. For this, the now universally known Corsair iCUE software must first be installed. Here, the fans can be configured in the lighting and speed, the LCD display including RGB ring and other RGB-capable devices. The software is visually appealing. It is especially nice that you can address the individual LEDs of the fans and set them in the appropriate RGB colors as desired.

Aside from custom RBG lighting, you can choose from one of the many RGB modes. Once again, everything is available here and a very large spectrum is covered. The colors are first class and thus meet our requirements. We have the same opinion about the LCD display. Here you can choose to display the computer’s stats, such as CPU or GPU temperature. But pictures or animations as PNG or GIF are also possible. This gives creative minds another option for individualization.

The iCUE H170i ELITE LCD from Corsair is an AiO water cooler that packs a punch. A large and quite flat 420mm radiator is supplied with enough coolant by a pump that is a bit noisy at times. The build quality is on the highest level and convinced us once again. The new ML RGB ELITE fans enhance this impression not only with their quality, but also with their performance on the radiator. As usual, the AiO water cooling system once again delivers what Corsair has been known for for years. The cooling performance keeps up in the upper range of the tested water coolers. Those who own the predecessor can optionally upgrade their AiO with an LCD kit, which gets a buy recommendation from our side, just like the iCUE H170i ELITE LCD.

Decent amount of power on 420 mm with an elegant LCD display on the pump block.

We have already featured the iCUE H170i CAPELLIX from Corsair on our site. Another well-done addition to Corsair’s high-quality AiO lineup. Now there is the iCUE H170i ELITE LCD, which counts as an upgrade of the Elite CAPELLIX-AIO and wants to put a scoop on it. Probably the biggest innovation: a pump housing with an … (Weiterlesen...)