Inter-Tech Elektronik Handels GmbH is a company based in Germany and was founded in 1996. Since then the main focus is on a Europe-wide distribution of OEM and retail hardware for PC systems. Originally, the portfolio mainly consisted of PC cases and power supplies. However, this has now been expanded to include numerous divisions (fans, peripherals, hard disk housings, etc.). In spring 2020, Inter-Tech introduced the C-701 Panorama, a new case with two vertically separated chambers. Optically it reminds very much of the popular Lian Li PC-O11 Dynamic at first sight.

The Inter-Tech C-701 Panorama is supposed to convince especially through tempered glass on the front and the side. In combination with optional RGB elements it could become a perfect showcase. In addition, there is a generously designed interior and space for up to nine 120 millimetre fans. But the price is particularly remarkable. At 65 Euros (current: € 91.90 *), the C-701 Panorama is about 50 Euros less expensive than the Lian Li PC-O11 Dynamic. In this review you’ll find out what you have to do without the C-701 and how this tower performs in our test environment.

The Inter-Tech C-701 Panorama is delivered in a plain brown cardboard box. On the box are printed in black color pictures of the tower and information about the most important features. In order to protect the glass side panels from shocks, the tower was wrapped with a foil and two elements made of soft foam. There is also an additional protective film on the glass elements and protective plastic caps on all four corners. The supplied accessories are located in a brown cardboard box and are housed inside the case in the HDD cage. Included are all important screws, four black cable ties, an MB speaker, a PCI replacement panel, two brackets for one 2.5″ SSD each and a nut for screwing in spacers. The scope of delivery also includes four magnetic dust filters for the fan openings. But you won’t find pre-installed fans and installation instructions in the Inter-Tech C-701 Panorama.

As already mentioned, the Inter-Tech C-701 Panorama and the Lian Li PC-O11 Dynamic could well be twins. The front is dominated by a large, slightly tinted tempered glass window. This is attached to the case by four flat knurled screws and allows a good view of the case’s interior. Only the right quarter of the window and a small strip at the top and bottom are completely blackened. Fans cannot be installed directly at the front.

If you lift your eyes and look at the lid section, the I/O panel immediately catches the eye. This was attached in the right area of the lid and has two USB 3.0 or two USB 2.0 ports, two sockets for microphone and headphones as well as three buttons for power, reset and RGB. Approximately two thirds of the lid has been fitted with a fan grill for up to three 120 millimetre fans. A magnetic mesh filter mat is used as dust protection.

The left side panel continues the design that was started on the front. It consists of a four millimetre thick glass and is also slightly tinted. Here too, the upper and lower parts of the glass have been blackened to conceal the housing frame. It is attached with four flat knurled screws. The right side panel is made of steel, is mounted using two normal knurled screws and has been equipped with two fan openings. Behind both openings I find two magnetic dust filter mats made of mesh.

The Inter-Tech C-701 Panorama has four black plastic feet for a secure stand. To protect the ground and minimize vibrations, the feet are additionally covered with small rubber strips. Since the power supply unit in the C-701 is not mounted at the bottom, there is instead a huge fan opening for up to three 120 millimetre fans and a further mesh dust filter.

The back side differs significantly from the design of a conventional midi tower. With the C-701 Panorama, Inter-Tech relies on a vertical two-chamber system. On the left side there are therefore only eight reusable PCI slot panels, the area for the I/O shield and fan slots for two 80 millimetre fans. On the left side, the power supply unit is placed vertically and there are also mounting points for two additional 80 millimeter fans.

As we already suspected based on the exterior design, the layout inside deviates significantly from the usual standard. For example, the manufacturer relies on a vertical two-chamber system in the C-701 Panorama. The main chamber has a very open design and offers plenty of space for numerous components. Theoretically, there is even room for E-ATX mainboards and up to eight expansion cards. However, if you install an E-ATX mainboard, it will overhang the three lateral fan mounting places. Finally, it should be mentioned that the mainboard tray has been equipped with no less than fourteen openings to facilitate the cabling.

Let us now turn to the back. Since the C-701 panorama is not exactly narrow with a width of 260 millimeters, it should not hurt anyone that the second chamber also offers a lot of space. So the buyer here has up to 95 millimeters of space available for laying cables. In addition, the power supply unit and possible data carriers are wonderfully concealed by the second chamber. The power supply unit rests on three steel brackets without decoupling.

The mounting of data carriers is simple in the C-701. On the back of the mainboard tray there is a mounting frame for two 3.5″ and two 2.5″ hard disks. For mounting, the frame, which is fastened with screws, must be removed, equipped with the data carriers and then reinstalled. A thin layer of foam rubber ensures easy decoupling, at least for large hard disks. For the accommodation of two further 2.5″ SSDs or HDDs, I include appropriate steel frames in the scope of delivery. These can each be screwed to one of the four mounting points for 80 millimeter fans.

Regarding the external and internal workmanship of the Inter-Tech C-701 Panorama there is hardly anything to criticize. The paintwork is clean and there are no sharp edges. However, if you remove all side parts, the body doesn’t seem to be as torsionally stiff anymore. Furthermore, we noticed that the glass side panels protrude a little above the body.

Now we come to the system installation. As hardware we use a AMD Ryzen 5 1400 on a MSI B350 PC Mate with 16GB Crucial Ballistix Sport LT grey DDR4-2666. The Ryzen is cooled by an ALSEYE Xtreme X360 AiO water cooling and is overclocked to 3.8 Ghz (1.25V). For the image output a GTX 1060 6GB from Gigabyte AORUS is responsible. The power supply is provided by the fully modular LC-Power LC550 V2.31 Platinum with an efficiency level of 80 Plus Platinum.

Considering the generous space in both chambers, we were not surprised that the installation of all components was done very quickly. The same applies to the cabling, of course. Due to the up to 95 millimeters of air behind the mainboard tray, one could theoretically also simply stuff the cables into the power supply chamber and close the side panel very quickly. However, we made a bit more effort again and everything could be well lashed down by the cable tabs. The final result, at least in our eyes, is definitely worth seeing.

In terms of space for PC components, the Inter-Tech C-701 Panorama is more of a two-edged sword. Thus, a maximum of 370 millimeters of space is available for graphics cards and 200 millimeters for power supplies. This is very generous and should allow the assembly of almost all components in these areas. However, where it looks a bit different is the CPU cooling area. If you want to install an air cooler in this midi tower, you’ll have to be content with just 130 millimeters of space. This is unfortunately not enough for most powerful air coolers.

If you want to install a powerful CPU in the C-701 Panorama, you should rather use a custom or AiO water cooling system instead. With room for up to three 360 radiators (depending on the thickness of the radiators), this midi tower is clearly a case that screams for the installation of a water cooling system. If the cooling solution, such as the ALSEYE Xtreme X360 that we installed, then has chic RGB effects, all the better. If you mount a radiator parallel to the mainboard tray, the PCB of the graphics card should not be too long, though. In our case, the ALSEYE Xtreme X360 was too thick and the graphics card could not be mounted. Alternatively, you can also mount the graphics card with an additional conversion kit, then it won’t get in the way of the radiator.

The Inter-Tech C-701 Panorama comes from the factory without any fans. This means that higher temperatures of the individual components are to be expected with powerful hardware. Therefore, the last step is the load test. With the help of the tools Prime95 and Furmark, the processor and graphics card were fully utilized. During the load the room temperature was 22°C and the temperature values were determined after 15 minutes. The test was also carried out with two different fan constellations (standard equipment, 4x 120 millimeter fans).

As we already suspected, the absence of case fans has a negative effect on the temperatures. With additional fans, the maximum temperature reached by the processor and graphic card drops by five degrees each. But even in this worst case scenario, both components are still far from their allowed maximum values. At this point it should be mentioned that we noticed unpleasant vibrations after the fans were installed. These were probably transmitted from the fans to the steel side panel. If the sidepanel was removed or held in place, the noise was gone. If one plans the installation of many fans, then one should definitely decouple them.

Conclusion on the Inter-Tech C-701 Panorama

Let us now come to a final conclusion about the Inter-Tech C-701 Panorama. With this midi tower, Inter-Tech could prove how much case and especially glass one can buy at a relatively low price. The C-701 offers a solid workmanship, space for a lot of hardware, respectively a water cooling system and two elements made of tempered glass. Thus it is perfectly suited as a showcase to present your own system on your desk. Also the fact that all important openings of the case are equipped with magnetic dust filters has to be emphasized here. With a price of € 91.90 * it is also much cheaper than other cases in this category.

But the layout also comes with negative points. The C-701 offers only 130 millimeters of space for CPU air coolers. So if a powerful CPU is to be used, you actually have little choice and have to invest additional money in an AiO water cooling. The same applies to fans and RGB elements, of course. There are none of these in the C-701 ex factory.

Nevertheless, the Inter-Tech C-701 is in our opinion a very good alternative to the more expensive competition. If you’re planning a system with water cooling and prefer the cube design, then you should definitely include this tower on the shortlist.

With plenty of space for water cooling and the use of tempered glass, the Inter-Tech C-701 Panorama is perfectly suited as a showcase.

be quiet! Silent Base 802: New version comes with higher MSRP 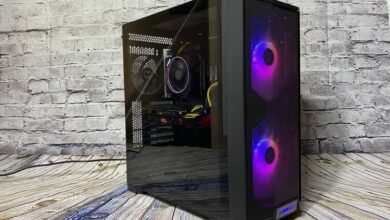