Huawei is rather known for its established smartphones in this country, but the Chinese tech giant has a lot more products in its portfolio. Among others, besides tablets and smart home devices, there are also notebooks, which are the subject of this review.

The MateBook X Pro, with its 13.9 inches, is a good size to always have in your pocket. The MateBook D 16 is a bit bigger with its 16 inches, but still handy enough for mobile use. In this respect, the MateBook D 16 is especially suitable if you do not have another PC or monitor, because it is more relaxing to work on the larger screen for a long time.

The design of the MateBook X Pro is very similar to that of a MacBook. Especially the keyboard looks very similar. The screen, on the other hand, is on a much better level. The X Pro has almost no display edges, which makes a futuristic impression. The display edges of the MateBook D 16 are also narrow, but they do not look as impressive since the edge is a bit raised. The casing is made of aluminum in the MateBook X Pro and D 16 and feels valuable. The D 16 is only available in the color Space Gray. The MateBook X Pro is also available in Emerald Green. This somewhat bolder color looks great on the X Pro, but is unfortunately only available in the fully equipped variant. In general, however, the MateBook X Pro feels more premium than the D 16. Unfortunately, neither notebook is foldable, and stylus input is not possible – which can be quite an important feature for students.

On both MateBooks, the front camera is located in a button under the keyboard. If you now want to use the webcam, you press the webcam button, which then opens to reveal the webcam. This is a clever idea to free up space at the edge of the screen. Somewhat unusual is the viewing angle that this camera offers. A viewing angle from below the face is rather unpopular, as you can mainly capture “unattractive” facets of the face. In addition, the fingers are often visible in the picture and in front of the face – at least when you are typing.

Although the webcam now no longer has to be squeezed into a thin screen, the quality of the image is no better than other laptop webcams I’ve used. At this point, the disadvantages of the awkward angle could have been made up for with an improved camera. Or Huawei deliberately decided against it so that the wrinkles would not be even more visible from this position. 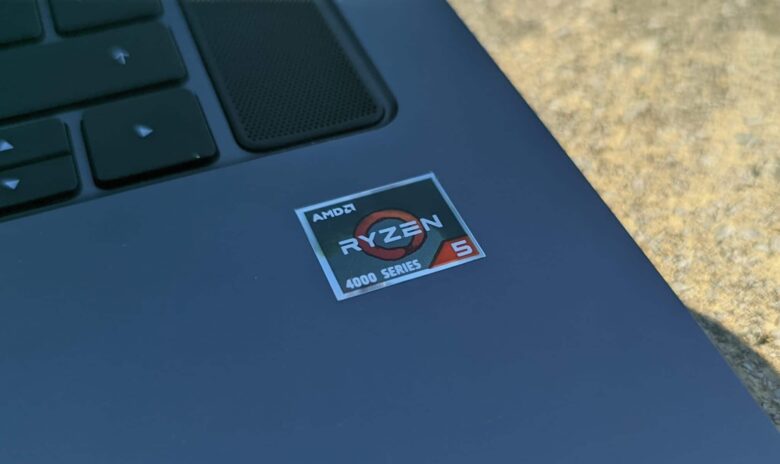 For a work or all-purpose laptop, the internal graphics units are sufficient, but they can’t keep up with dedicated notebook GPUs like in gaming devices. However, Intel in particular has improved its internal graphics unit significantly with the new CPU generation via the Iris GPUs, but it cannot yet come close to keeping up with Nvidia, for example.

It is nice to see that both devices come with a 56 Wh battery and a 65 Watt charger. Likewise, that an NVMe SSD was chosen for the internal storage.

The Huawei MateBooks are shipped with Windows 10 Home. In addition, however, there is also other software on the devices that Huawei has included. On the one hand, there is the so-called PC Manager and Huawei Share. Huawei Share should already be known from the Huawei smartphones.

The included PC Manager can benefit a bit more from a Huawei smartphone. For example, you can access your smartphone’s picture gallery via the PC Manager. In addition to further smartphone integration, the PC Manager, true to its name, serves to monitor the PC’s function. This includes updating and installing drivers, optimizing the performance, and monitoring the hardware (e.g. temperatures). Furthermore, the PC Manager integrates other Huawei services, such as the Huawei Mobile Cloud.

To start with, I have to note that Huawei provided me with the weaker equipped MateBook D 16 and the fully equipped MateBook X Pro. Thus, I unfortunately cannot make any accurate statements about the other variants of the two notebooks.

Graphics performance, however, is a different story. Here, the MateBook X Pro with the Iris Xe GPU reaches about twice the value of the MateBook D 16. In general use, however, this does not manifest itself. Only in video games would the difference be clearly noticeable.

Unfortunately, neither device can keep up with the new M1 processor in the MacBook Air. However, this is a general problem in the laptop space at the moment. I hope that in the future reasonable support for ARM will also exist on Windows, so that competition is possible again.

There’s no need to worry about the battery on either MateBook. I got through the day well with each, even with heavier use. Seven to eight hours of battery life at a stretch are possible with both devices. This battery life is comparable to other good Windows ultrabooks. With the help of the 65 watt charger, the MateBooks are also quickly recharged after a long day of work.

At the same time, the two laptops are very similar in terms of performance in the basic configuration. The only difference is the slightly higher-quality build of the MateBook X Pro and the high-resolution touch display. The smaller size of the X Pro also makes it a bit more suitable to carry around on a daily basis. If you can do without these features, the MateBook D 16 is clearly the better deal.

The price-performance ratio of the two MateBooks is in the upper midfield compared to other Windows notebooks. You pay similar prices for comparable hardware in the competition. However, they have a few unique selling points, such as the MateBook X Pro’s high-resolution touch display.  Overall, I feel that more thought went into designing the MateBooks than many other notebooks, which makes them feel more unique in comparison. Huawei dares to do a bit more in terms of design, for example, even though it does look a lot like a MacBook at times. But it doesn’t feel like just “another notebook,” which is why I was interested in a review of the MateBooks.

Even the MateBooks can’t keep up with the M1 MacBooks at the moment. There are major issues in the Windows ecosystem here that need to be fixed before catching up. A comparable battery life and performance at the price of the MacBook Air is not achievable at this point. Still, there is no getting around Windows in many cases. Notebooks with touch displays, like the MateBook X Pro, or 2-in-1 laptops are not in Apple’s portfolio and most likely won’t be in the future. On one side the advantage – on the other side the disadvantage when a company controls the software and also the hardware.

With the MateBook D 16 and the MateBook X Pro (2021), Huawei has brought two good everyday notebooks to the German market. The MateBook D 16 is the cheaper budget choice, but its large 16.1-inch screen is particularly convincing for home office and users without a desktop PC. The MateBook X Pro, on the other hand, is positioned as a premium laptop. Furthermore, the portability is the main focus here, with which the X Pro can convince.

Thanks to the modern hardware and good pricing policy, I can also recommend the two MateBooks alongside comparable notebooks from other well-known manufacturers. For users of Huawei smartphones, the MateBooks offer advantages due to the integration of Huawei services, which makes them especially attractive for this group.

Two solid notebooks with a modern design. Especially interesting for owners of other Huawei devices.

Huawei is rather known for its established smartphones in this country, but the Chinese tech giant has a lot more products in its portfolio. Among others, besides tablets and smart home devices, there are also notebooks, which are the subject of this review. Huawei provided me with two models from their 2021 laptop lineup for … (Weiterlesen...)