In the gaming sector, new and increasingly specialized devices are being presented that are designed to perform very specific tasks and improve the gaming experience as well as the performance of the respective users. This review is dedicated to the “WRT32X” from Linksys, a similar device. On paper, the gaming router scores particularly well with the built-in killer prioritization engine. According to Linksys, this should enable a ping that is up to 77 percent lower – if this promise is actually kept in practice, it would be a dreamlike device for ambitious gamers. The extent to which this and other promises can keep up with practice, however, can only be revealed to potential buyers through a test – the report of such a test can be found below.

First, it should be noted that Linksys has been distributing a very similar device for quite some time. The “WRT3200ACM” is equipped with exactly the same hardware as the WRT32X. The only difference between the two routers is the software used. The most noticeable software difference, as already mentioned, is the killer prioritization engine, which should allow a drastically reduced ping.

But first you should take a look at the hardware. It is noticeable that the gaming router does not have a modem. If you want to establish a connection to the Internet with the router, you should purchase a modem in addition to the router.

The gaming router offers simultaneous WLAN 802.11a/b/g/n/ac/h. It provides a USB 3.0 port, a USB 2.0 port and an eSATA port. The manufacturer mentions IPv6, VPN passthrough, TPC/DFS and OpenWRT capability as special features. There are also five Gigabit Ethernet ports, one of which is for connecting to the modem.

Given the fact that the killer prioritization engine is the only difference between this highly acclaimed but otherwise average gaming router and a conventional device from the same manufacturer, the inclined reader wonders what this engine is and what it actually offers the user/player.

First, it must be made clear that the advantages of the engine can only be exploited with a “killer-capable” computer. Currently, only a few devices are available that have a corresponding network adapter from the manufacturer Killer. However, if such a device is found in the home network, the “Killer Network Manager” on the computer is automatically synchronized with the router. Once this is done, traffic is automatically set to benefit both the gaming PC user and the other home network users. The killer engine therefore prioritizes the data sent over the network, which should ultimately lead to a significant reduction in ping time on the gaming PC, while other users of other devices that are also connected to the network are not disturbed in their activities – for example when streaming videos. In other words, the data is distributed in such a way that all connected terminals benefit to the maximum according to the tasks performed on them.

For the player, this should result in low latencies, less delays in the game and the possibility of downloading files while playing.

Overall, it seems a little disappointing that the router is no better equipped than an average model in terms of hardware. The possibilities of the killer priorization engine are, at least in theory, very interesting.

User Interface of the Linksys WRT32X

Before the router can be used, it must first be set up. A user interface in German language is available for this purpose, which is clearly designed, guides through the installation and then provides a lot of more or less relevant information.

First, a network must be set up and assigned an individual name and password. Subsequently, an administration access is set up, which can be used to call up the information already mentioned and to make various settings.

Under the tab “WLAN settings” you can – not surprisingly – make settings. For example, experienced users can change the default settings for the security type, WLAN channels, frequency bands and WLAN mode. In addition, a separate guest account can be created with your own user name and password.

A click on the “Devices” tab takes the user to an overview of all connected devices. Prioritization” is the most exciting function of the gaming router and is intended to make it unique. Here you can find out how many killer-capable devices are connected to the network. In addition, the data traffic of individual devices can be prioritized manually. This manual prioritization makes it possible to prioritize even devices that are not killer-capable and thus represents a major advantage of the router. The prioritisation is ultimately done in a simple way: the individual devices are clicked with the mouse and dragged into the “Higher priority” field.

Furthermore, advanced settings can be made via the user interface. For example, you can assign static IP addresses, set up port forwarding, connect a VPN client or access external memory.

All in all, the user interface is very user-friendly. Most functions are self-explanatory. Smaller texts and notes facilitate operation and help with ambiguities. The entire interface is very clearly designed, well structured and offers the user numerous possibilities. Both amateurs and experienced users should be pleased with the sensible structure.

As expected, the theoretical WLAN speeds given are far from the actual speeds achieved. However, this is not a problem that only affects the tested router. In principle, this reprimand applies to almost every router. For advertising reasons, manufacturers work with theoretical values that are legitimate, but cannot be achieved in practice.

Thus Linksys specifies a maximum possible speed “unbeatable 3.2 Gbit per second”. First of all, this statement has to be revised on the basis of the aforementioned facts. In addition, the attentive reader will notice that this is a classic “up to” statement, which does not exclude the possibility that much lower speeds will be achieved in practice – only higher ones will be excluded.

In practical tests, the maximum speed achieved is around 650 Mbit per second. On average a speed of approx. 140 Mbit per second can be calculated. With killer-capable devices and corresponding prioritization and also in all other relevant areas best conditions, however, as already mentioned, significantly higher speeds can also be achieved. The speeds achieved are, of course, also dependent on the spatial conditions, as it is a WLAN signal. Overall, they can be described as good.

Concerning the ping, Linksys talks about reducing it by up to 77 percent. The killer prioritization engine is also responsible for this. Tests have shown that a significantly lower ping can actually be achieved with suitable equipment than with other routers. Also here however, again optimum or at least approximate optimum conditions must exist. In fact, the ping can be reduced – the percentage by which this reduction occurs cannot be exactly quantified. Especially with simultaneous downloads, i.e. when the network is busy, the difference is noticeable. However, it can be assumed that the ‘up to’ information used in advertising is not nearly achieved. Nevertheless, the test result is pleasing.

All in all, it is a quite fast router with pleasant ping times, which should definitely be useful for gamers. Whether the promises made are considered to have been kept is ultimately a question of perspective. Since these are maximum values, Linksys keeps all its promises purely formally. Those who actually expect WLAN speeds of “unbeatable 3.2 Gbit per second” and a 77 percent reduced ping will be disappointed. If you expect a fast router that reduces the ping time noticeably, you can use the WRT32X without any worries – you will find one in it.

Conclusion on the Linksys WRT32X

Since manual prioritization can also be set up in the predecessor model, the large surcharge is ultimately paid for automatic recognition and prioritization of killer-capable devices.

Overall, the gaming router cannot receive an absolute recommendation due to the high price.

A technically good model with solid hardware and excellent software - but overpriced in comparison. 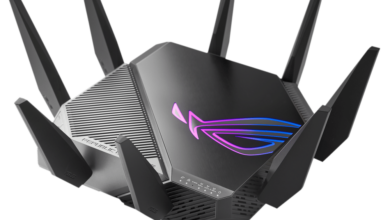