The rebirth of a legend Sharkoon promises with the gaming mouse Drakonia II the successor of the popular Drakonia. We took a closer look at the kite among the gaming mice.

The design is definitely an eye-catcher. The mouse does not only carry the dragon in its name. The Drakonia logo with the stylized kite and the eye-catching scale design adorn this model similar to its predecessor. Thus the Drakonia II should stand out optically from other gaming mice. The mouse wheel, logo and side buttons are RGB illuminated. A further illuminated display on the side shows which DPI level is currently set. The mouse is also available in two colours, green and black.

The Drakonia II is equipped with a total of twelve keys. Left and right mouse buttons, mouse wheel, two DPI setting buttons and a quick fire button are located on the top and six additional buttons on the left. The cable is color-matching textile-coated and about 1.80m long. A small carrying bag and a set with spare mouse feet are also included.

Plastic was used for the workmanship. The result makes a robust impression and feels good in the hand. The manufacturer promises a service life of at least ten million clicks. The keys have a slightly stronger pressure point, but this is clearly defined. The mouse wheel is rubberized and can be turned precisely. Ergonomically, the mouse is designed for right-handed users. The side parts are textured to give a better grip, but the mouse still feels rather smooth. Practical is the adjustable weight of the Drakonia II. The normal weight is about 135 grams, which makes the >em> Drakonia II one of the heavier representatives among gaming mice. This can be adjusted by five individually removable weights. Without weights the mouse weighs only 107 grams.

However, the mouse tends to be less suitable for players with small hands. The Drakonia II belongs to the larger mice. You can reach all the side keys with your thumb, but it’s not quite optimal. Also the fast switching of the DPI with the standard middle buttons could be a bit uncomfortable, depending on how you grab the mouse.

The Drakonia II is equipped with the optical PixArt 3360 sensor and has a sampling rate of 1000 Hz maximum. The DPI can be switched in six steps between 100 and 15,000. The sampling rate and DPI levels can be adjusted using the software. Of course, a gaming mouse has to shine primarily when playing. She also did this during the test and was able to convince with high precision and reliability in shooters, strategy games, MMOs and RPGs. The additional side keys, which are assigned 1 – 6 as standard, have a slightly higher resistance than the other keys, but can still be operated accurately and reliably. The handling is still pleasant even after several hours at a time. On a textile mouse pad, the mouse glides as precisely as it does directly on the tabletop, feeling slower without the mouse pad.

The software for the settings of the Drakonia II can optionally be downloaded from the manufacturer’s website. This is not necessary for the basic operation, under Windows 10 the mouse is recognized directly and is ready for use. However, the software offers some useful features, so a download is recommended.

Five profiles can be saved in the mouse ready for retrieval. Further profiles can be saved and loaded as required. For each profile, you can customize key mapping, DPI levels, lighting, and mouse behavior individually, so you can create profiles for different games. All twelve keys can be assigned individually and the rapid fire command can also be configured. The sampling rate can be set to 125 Hz, 250 Hz, 500 Hz or 1000 Hz. The DPI levels can be set between 100 and 15,000. A macro manager is also available. The RGB lighting can also be adjusted. The Drakonia II can be either monochrome, in colour change, pulsating, continuous or not at all.

The Drakonia II may well call itself the rebirth of a legend. Sharkoon has launched the Drakonia II, a neat successor to the first Drakonia. For € 39.79 * you get a very good and precise beginner gaming mouse, which has the most important features and even more in its baggage. If you’re looking for a reliable gaming mouse that’s a little bigger but doesn’t want to go for one of the high-priced models directly, the Drakonia II is the right choice. 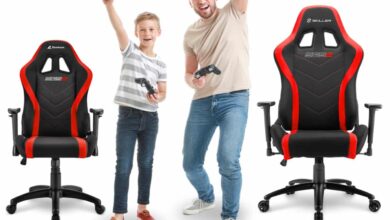