Samsung’s T series has been considered one of the most popular when it comes to reliable and above all fast external hard drives for years. The slim design and speed are two factors that have resulted in a large number of enthusiastic users. But now Samsung wants to score points for sure. With the Samsung Portable SSD T7 Touch, the South Korean manufacturer has installed a fingerprint sensor for the first time. This means that the stored data can only be read by the right people. Our test should show what Samsung’s new external hard drive is capable of.

The scope of delivery includes the most important things to get started right away. Besides the small SSD T7 Touch itself, Samsung also includes two different USB cables. So that everyone can work with the drive, both a USB-C to USB-C as well as a USB-C to USB-A cable is included. You won’t find a CD with the appropriate software. Instead, it is already on the SSD itself. Since my MacOS did not respond to the pre-installed software, I had to download and install it again via the support page of Samsung. But the problem is rather to be found on the MacOS Catalina site. Of course the scope of delivery is small, but that’s all you need to work effectively with the SSD T7 Touch.

Before we take a closer look at Samsung’s Portable SSD T7 Touch, let’s first take a look at the technical details of the small drive.

Until now, Samsung’s T series consisted of the SSD T3 and its successor – the SSD T5. The already fast SSD T5 had a performance disadvantage in comparison to Samsung’s SSD X5 that shouldn’t be underestimated. Finally, the SSD X5 relies on a fast Thunderbolt 3 connection. With the introduction of the SSD T7 Touch, Samsung wants to bridge this performance deficit, among other things. Fast, latest-generation USB-C and the latest technology inside the new SSD should make it possible.

While external hard disks used to be bulky and heavy in the past, it is now amazing how much technology can fit into the smallest space. The SSD T7 Touch is again clearly aimed at users who want to take a large amount of data with them wherever they go. For those who take a hard disk out of the house, data security is not unimportant. Samsung knows that too. For this reason, the Koreans have installed a fingerprint sensor, which is supposed to prevent unauthorized access to the stored data.

The right size for everyone

Those who are interested in the SSD T7 Touch are first spoilt for choice. Apart from the 500 GB version we tested, Samsung also has larger versions in its offer. Thus, you can also reach for 1 TB or even 2 TB. Thus, everyone should find the right size for him or herself.

In terms of equipment, Samsung is a reference product in the field of SSDs. At the latest since the launch of the extremely fast Samsung Portable SSD X5, the Koreans have made it clear that they leave nothing to chance when it comes to the inner workings of their hard drives. With the new SSD T7 Touch, Samsung remains true to this credo. For the connections, the hard drive expert relies on modern USB Type C. The USB 3.2 Gen 2 protocol is used to enable the fastest possible data transfers. In theory, breathtaking 10 Gbit/s are possible with this. However, since these speeds are only possible for the rarest devices, the SSD also supports slower USB standards thanks to downward compatibility. However, this means that you have to live with losses in data transfer speed.

Inside the SSD T7 Touch, Samsung relies on a potent NVMe SSD. This offers the new TurboWrite Technology. This results in a transfer rate of over 1000 MB/s, which pushes a classic USB connection to its limits. Samsung has opted for 3D VNAND for its new SSD T7 Touch. This is addressed in the MLC process. So that the SSD doesn’t get too hot, Samsung has again integrated its Dynamic Thermal Guard. This ensures reliable temperature management in conjunction with a powerful ePCM cooling element. The cooling element relies on passive cooling. The cooler absorbs heat and releases it slowly and steadily to the environment. In this way, Samsung wants to achieve constant cooling of the controller. Furthermore, the outer shell of the SSD should never reach a temperature above 45 degrees.

At first glance, Samsung also relies on the classic design of the T series for the SSD T7 Touch. This is kept rather plain and thus hardly noticeable. The SSD T7 Touch is also available in noble silver in addition to the black version we tested. The back of the T7 Touch is hardly distinguishable from its predecessors. However, if you turn the SSD upside down, the changed upper side comes out. The fingerprint sensor jumps directly into your eye. The square security sensor is framed by a blue LED strip. This makes it clear in which status the SSD is currently in through different blinking patterns. If you turn the SSD on its side, you can see the USB Type-C interface.

As is typical for Samsung, the workmanship is on a high level. Starting with the aluminium case and including the cables that come with it, everything is in top condition. This is quite astonishing considering the slim weight of just 58 grams. After all, something like this is normally only possible with cheap plastic. Besides the narrow weight, the SSD T7 Touch’s dimensions also turn out very small. It measures just 85 mm x 57 mm x 8 mm. With the low weight and small dimensions, Samsung also brings a decisive advantage to the race. The T7 Touch is the perfect companion in any laptop or trouser pocket, no matter how small.

A glance at the T7 Touch immediately reveals its unique selling point – the fingerprint sensor. It can’t be overlooked at all because of the blue illuminated square frame. The data is saved on the hard disk after encryption with 256 bit AES. You don’t necessarily have to use the fingerprint sensor for this. Those who want to access their data more uncomplicated and faster can also completely disable the security options. Alternatively, a password can be set instead of the fingerprint for unlocking. If you want maximum security, select Fingerprint and password entry for unlocking.

Among other things, the “Samsung Portable SSD” software can be used to make security settings. Here, you have the choice whether you want to make the settings via software on the PC or with the help of the practical app for Android on the smartphone. The setup of the SSD T7 Touch is pleasingly uncomplicated. The user only has to set which security mechanisms he needs. Here one has the choice between fingerprint or password or both. Incidentally, it is sufficient to set it up on one device. The hard drive itself retains its fingerprint decryption on every other device. A corresponding software does not need to be installed.

In the following you can follow the individual steps of the setup.

The LED not only shows the current operation of the SSD. It also shows the current status of the fingerprint sensor. For example, the LED flashes when the SSD needs to be unlocked. Fortunately, the sensor reacts at lightning speed. As soon as the matching fingerprint has been recognized, you have access to the requested data. Now the SSD T7 Touch can easily be used as an external storage medium.

I did a small performance test with the SSD T7 Touch. Using the Blackmagic Disc Speed Test program, I was able to perform a small stress test on my 2019 MacBook Pro. With a write speed of 816 Mbps and a read speed of 879.7 Mbps, the results were slightly below the maximum of 1000 Mbps specified by Samsung. However, other tests show that the speeds specified by Samsung are quite possible. For this, however, an appropriately potent source or target medium is required.

The small SSD doesn’t show any negative conspicuous features in the temperature development. As long as it operates in normal mode, no differences can be seen here. This doesn’t change blatantly even after a few hours of work. The T7 Touch merely reaches a lukewarm temperature here. You can only feel a temperature increase when the hard disk is challenged. I carried out a long-lasting data transfer, which made the small drive get warm. However, everything remained within safe limits at all times. At least at no time I could notice a loss of performance due to the temperature. The hard disk worked consistently fast. Fortunately, Samsung has integrated a sophisticated temperature management. An overheating of the SSD T7 Touch is almost impossible thanks to the management.

To make a long story short: Samsung remains the reference in the field of portable external SSDs from my point of view. This is not only due to the still low weight as well as the slim dimensions, which make the small drive the perfect companion for work and leisure. Moreover, a purchase of the SSD T7 Touch is also future-proof. After all, Samsung relies on USB 3.2, which, in conjunction with the right hardware, enables data transfer rates of up to 10 GBit/s. But also the normal read and write speeds that I could achieve with the SSD T7 Touch convinced me throughout. If you have a correspondingly fast source or target medium, you can easily reach the 1000 MBit/s specified by Samsung. But Samsung has also done a great job in terms of data security with its fingerprint sensor and reliable encryption. What additionally convinces me is the three-year manufacturer’s warranty of Samsung. The Koreans seem to be thoroughly convinced of their product. And so am I. 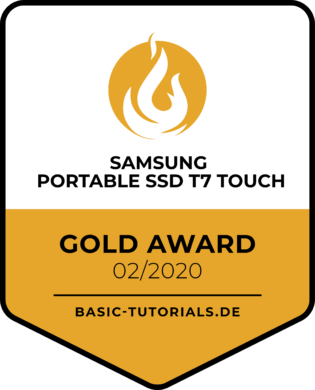 With the SSD T7 Touch, Samsung combines practicality and speed with a high level of data security.