The name Montech stands for a PC component manufacturer that is still quite unknown in Germany. Montech was founded in 2016 and is a subsidiary of the hardware distribution company TELON TECHNOLOGY CO., LTD. The main goals of the company’s foundation was the development of PC components that should convince with quality, functional design and a reasonable price. The manufacturer’s portfolio includes PC cases, power supplies, CPU coolers and gaming peripherals..

In September 2021, Montech has introduced three new cases with the AIR 1000 series. In addition to the variants “Premium” (Tempered Glass, RGB) and “Silent” (noise reduction), there is then the cheapest version “Lite”, which we will take a closer look at in this review. Montech advertises a high-quality build and optimal airflow, which is supposed to be achieved by a mesh front panel. Other notable features include high hardware compatibility, easily removable dust filters, three pre-installed case fans and a Tempered Glass side window. In terms of price, Montech estimates a purchase price of €59.90 (MSRP) for the AIR 1000 Lite. Find out if this midi tower is worth the money in this review.

The Montech AIR 1000 Lite comes packaged in an unspectacular brown cardboard box with black lettering. On the outside are printed pictures of the case and all the important technical specifications. Inside the box, the tower is wrapped in normal styrofoam and a plastic film. The styrofoam blocks seem a bit too thin to us considering the weight of the tower. The included accessories have been placed in the HDD cage and are in a white cardboard box. Inside, Montech stows a bag with all the important screws, five cable ties, two Velcro strips, a nut for the spacers, and a motherboard speaker. Also included are the three pre-installed case fans as well as three dust filters and an illustrated installation guide.

As always, we’ll start with an exterior look at the AIR 1000 Lite. In terms of design, Montech relies more on a restrained and timeless design for the Lite version, which is only broken up a bit by the Tempered Glass side panel.

If we start in the front, we find a high-quality processed steel panel in mesh look. All holes have a diameter of 1.5 millimeters and are 1 millimeter apart. In addition, there are two openings on the side of the front panel, which should further improve the fresh air supply. The disassembly of the steel plate is very simple. Since Montech relies on a push-pin attachment, no tools are necessary. Behind the front panel, the midi tower reveals space for up to three fans, two of which are already occupied at the factory. The fine dust filter placed in front of it is located in a frame and can easily be pulled out upwards.

On the top, things continue in an airy fashion. Almost the entire lid section has been fitted with a ventilation grille, above which a magnetic mesh filter has been placed. Furthermore, the grille has mounting rails for a lid radiator. Montech has placed the I/O panel in the front area of the lid. It has two USB 3.0 Type-A and one USB 2.0 Type-A port. Furthermore, the AIR 1000 Lite has three buttons (power, reset, LED) and two jacks for headset and microphone.

As mentioned earlier, the AIR 1000 Lite has a Tempered Glass side window, which is mounted on two hinges and can be easily flipped open. The glass is three millimeters thick and has two magnets and a loop in the front area. The window can also be completely removed for installation. The right side panel is made of steel and has sufficient stability. Here, too, removal is possible without tools via knurled screws. Montech relies here on so-called “captive thumbscrews”, which remain on the side panel.

The back of the AIR 1000 Lite holds no surprises for us. The power supply is mounted at the bottom and above it there is room for up to seven expansion cards, which have to be screwed outside the case. Above the perforated as well as reusable PCI slot bezels, we can then discover the mounting space for a single 120-millimeter fan.

The tower’s stability is provided by four stable plastic feet, which are covered with a thin layer of rubber to minimize vibrations and protect the surface. Furthermore, the fine dust filter for the power supply can be found on the bottom, which can be easily pulled out to the back.

The interior of the AIR 1000 Lite has an all-black finish on the black variant and has been designed to be very open. In addition, Montech follows the current trend and divides the interior into two chambers. The upper chamber has a flat motherboard tray, in which five cable management openings have been let in and partly even equipped with rubber sleeves. In the front area, the manufacturer does without hard drive cages and thus allows an unhindered air flow for the two pre-installed fans in the front. Finally, we would like to mention that there is a lot of space between the mainboard tray and the lid and a normal radiator should easily find room here.

If you lower your gaze a bit, you can discover the power supply cover. Provided with a cutout for the PSU and a front radiator, the tunnel also has a perforation in the upper area and eight holes for mounting two 120 millimeter fans. However, matching screws are unfortunately not included in the accessories. Finally, the cover is also equipped with four cable management openings. Thus, there shouldn’t be much in the way of a tidy interior.

Let’s now take a look at the back of the motherboard tray. Besides 20 millimeters of space for cables, you’ll find the pre-routed connectors for the front panel as well as various holding points for cable ties. Montech equips the AIR 1000 with three reusable Velcro cable ties ex works. In the lower area, the power supply rests on four small discs made of foam rubber and in front of it, the manufacturer has accommodated the HDD cage. This is modular and can be moved or completely removed

Since there is no room for data media in the large main chamber, they have to be placed elsewhere. A total of up to six hard disks can be installed in the AIR 1000 Lite. Two 3.5″ or 2.5″ HDDs can be placed in the cage below the PSU cover. The installation is done without tools (3.5″) or with four screws (2.5″). Four additional 2.5″ SSDs can be attached to the back of the motherboard tray. Twice a corresponding mounting frame can be used for attachment and twice the data carrier is screwed directly to the motherboard tray. The latter limits the space for cable management on the left side accordingly.

Overall, the build and paint job look solid for a case in this price range. There are no paint defects or sharp edges to cut yourself on during installation. The material thickness is also okay.

Now we come to the system installation. For hardware, we’re using a AMD Ryzen 5 1400 on a MSI B350 PC Mate with 16GB Crucial Ballistix Sport LT gray DDR4-2666. The Ryzen is cooled by an LC-Power Cosmo Cool LC-CC-120-RGB and is overclocked to 3.8 GHz (1.25V). A GTX 1060 6GB from Gigabyte AORUS is responsible for the image output. The power supply is handled by the fully modular LC-Power LC550 V2.31 Platinum with an 80 Plus Platinum efficiency rating.

As you would expect, the installation and cabling of all the components in such a spacious midi tower has turned out to be very easy. The large main chamber and pre-installed spacers allowed the motherboard to be quickly placed and bolted in place. The sensibly positioned openings for cable management also facilitate cabling immensely and make the finished system look very tidy. Furthermore, there is so much space above the mainboard that the 8-pin EPS12V connector can easily be connected later.

The spacious design is also reflected in the general hardware compatibility. Thus, the AIR 1000 offers space for 165 millimeter high CPU coolers and 340 millimeter long graphics cards. If you prefer to install a water cooling system, there is room for a 360 radiator in the front and a 240 radiator in the lid. A front radiator then naturally restricts the maximum length of the graphics card accordingly. There should also be no problems with mounting the power supply. Even with an HDD cage installed, the PSU can be up to 180 millimeters long. Without the HDD cage, there is no restriction.

From the factory, the Montech AIR 1000 Lite comes with three pre-installed case fans. These are of the AIR FAN P120s type and have been designed to be very unobtrusive. The 11 fan blades are completely black, just like the fan frame. The connection to the mainboard is made via a black 3-pin cable. At a maximum speed of 1200 rpm, the fans are only supposed to get 23 dBA loud and can move about 94 m³/h. Unfortunately, a slight rattling can be heard at all speeds.

Finally, we come to the temperatures that were reached in the Montech AIR 1000 Lite. During the stress test, Prime95 and FurMark were run for 15 minutes at a room temperature of 21°C. Furthermore, the test was performed with two different fan speeds and without a dust filter.

In terms of its cooling potential, the Montech AIR 1000 Lite definitely doesn’t have to hide. Even with reduced case fan speeds, the main components do not reach critical temperatures during the worst-case scenario. With the exception of the fans’ slight bearing noise, the test system acted quite inconspicuously in terms of noise. However, the test without the side panel also shows that the front panel and dust filter restrict the airflow somewhat.

Summary of the Montech AIR 1000 Lite

Let us now come to the concluding one of this review. Even though Montech is still a fairly unknown manufacturer, you would think that they have been around in the case segment for quite some time. Overall, the AIR 1000 Lite looks very well thought out and lives up to Montech’s motto “With Good Value”. It offers a lot of space for hardware and water cooling without looking clunky. The tempered glass side panel and aluminum front panel also make this midi tower look very high-end. Thanks to the mesh panel and the three pre-installed case fans, there is also no lack of fresh air inside. The workmanship and quality of the paint job are in line with the price range and are solid.

Nevertheless, Montech had to save in one or two places. For example, the packaging has fallen victim to the savings measures. The polystyrene blocks are so thin that they could easily be damaged during improper transport. Furthermore, a certain storage noise can be heard from all three fans. There were no other negative aspects from our point of view.

If you also recall the price of €59.90 (MSRP) and look at the features of the Montech AIR 1000 Lite, then this midi tower turns out to be a very good and cheaper alternative to the Fractal Design Meshify C and should also be excellent for stronger gaming PCs.

The Montech AIR 1000 Lite offers an exemplary overall package of solid build quality, effective cooling and excellent hardware compatibility. All this is available at a very fair price, which is slightly below the competition. 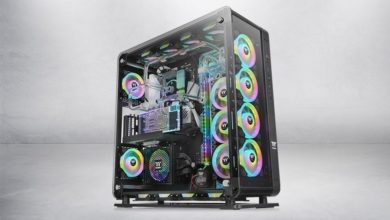 The name Montech stands for a PC component manufacturer that is still quite unknown in Germany. Montech was founded in 2016 and is a subsidiary of the hardware distribution company TELON TECHNOLOGY CO., LTD. The main goals of the company’s foundation was the development of PC components that should convince with quality, functional design and … (Weiterlesen...)