Just a first glance at the image, which is emblazoned on the cardboard, makes it clear that the Corsair K83 Wireless is drastically different from most other peripherals from Corsair. The package it’s in is amazingly small and the picture shows a touchpad and a joystick.

A gaming keyboard for use on the couch is something new. In the past, Corsair has already proven that it is a good pioneer. When RGB lighting became fashionable for keyboards, the US manufacturer was at the forefront.

We have dedicated a few moments to the exceptional new keyboard and subjected it to an extensive test. How it performs in practice, how much it differs from conventional keyboards and what else seemed important to us is explained below.

First of all, we would like to point out that Corsair includes several manuals with the keyboard. Even though it may seem a little strange at first, in the end it’s just a keyboard? – we find this operation quite nice. A cursory glance at the instructions will tell you that Corsair is trying hard to explain the functionality of the new keyboard to the inclined user. As we will see later, this is especially helpful for some hidden special keys.

But now to the design: The keyboard is small and handy. Despite its small size and couch appeal, Corsair does not forego an elaborate design. From above, the wireless keyboard presents itself pleasantly simple. The anthracite brushed aluminium cover not only looks good on the device, but also testifies to the professional choice and workmanship of materials we are accustomed to at Corsair.

On the right side of the keyboard there is a round touchpad and a small joystick. Corsair deliberately dispenses with mechanical keys and adjustable RGB lighting on this keyboard. This results in extremely flat and light keys, which nevertheless look very high-quality. The keyboard is very flat and light due to the decision against extras. With a weight of just 480 grams, it can be easily moved and actually used on the couch. However, lighting is not completely absent: The keys are illuminated in white.

The keyboard’s 2,070 mAh battery lasts 40 hours without illumination – with 100% luminosity it’s still 8 hours. However, the lighting is automatically switched off to save energy. After 90 minutes without input, the keyboard also switches off completely. Two hours are required to fully recharge.

The comparison of the K83 Wireless with a conventional gaming keyboard makes the differences clear in an impressive way. The device we tested is narrower, much thinner and flatter, weighs less and thus creates a pleasantly light impression. An ordinary keyboard, which otherwise seems very advantageous to us, seems downright clumsy.

The elegant, narrow and pleasantly simple design can therefore convince us. And also the workmanship does not need any excessive criticism. Corsair uses aluminum to create rugged keys and features two rubber strips on the underside of the keyboard for a secure and non-slip stand.
The keyboard can be connected to the end device either via an enclosed USB dongle or via Bluetooth. For gambling, the USB dongle is recommended for the 2.4 GHz connection, as the latency is much lower here. However, it is also not noticeable with the Bluetooth connection.

As mentioned earlier, the K83 Wireless has astonishingly flat keys. When you type, they remind you of the keys on a notebook keyboard. Anyone who usually operates laptops should therefore have no problems at all with the changeover. Corsair accommodates media keys by a second assignment of the F-keys. We noticed positively that a keyboard shortcut is not necessary to change the assignment, since the Windows Lock key, which is located below the metal volume control, can also be used for function switching. However, two status LEDs indicate which assignment is currently activated.

We particularly liked the touchpad in the test. Under Windows 10 and some other operating systems, it supports gesture control, so even simultaneous operation with four fingers is no problem. In practice, this is certainly an advantage. If you’re usually typing on a smartphone, you might find the touchpad a bit cumbersome at first. Instead, the joystick is intended for fast movements. Nevertheless, the apparent sluggishness, which is actually not so sluggishness, also has its charm. Especially since fast, action-packed games usually aren’t played lying on the couch anyway, the reaction speed doesn’t represent a significant point of criticism.

Hidden on the underside of the keyboard there is an additional key which is the R-key of the joystick. The L key, on the other hand, is located on the back of the keyboard. The arrangement may take some getting used to, but it fits the generally rather unusual field of application of this extraordinary keyboard. Depending on whether you use the keyboard in joystick or touchpad mode, the keys also react differently.

What we really noticed negatively in the test was the absence of the delete button. Corsair wanted to save space and therefore decided not to use this key. If you can’t do without forward erasing, you have to use a keyboard shortcut, which is not an elegant solution.

Overall, however, we are very satisfied with the keyboard and operation. By the way, we also liked the joystick very much – especially since its sensitivity in the software can be adjusted at will.

The software used is iCUE from Corsair. This software is also used with the other gaming keyboards of the manufacturer for individual customization. The software initially appears confusing, which is due to the many sub-items of the menu. With the K83 Wireless, however, this is not very problematic on closer inspection, as there are usually very few setting options hidden under the individual points. With other keyboards, this sometimes looks quite different. Navigation control, joystick calibration, lighting activation and some other options make it possible to adapt the keyboard to your own needs. Of course macros are also possible.

Overall, the software is very functional, but remains a little confusing. Another negative point: The keyboard is not reliably recognized by the software when a Bluetooth connection is established.

With this entertainment keyboard, Corsair ventures into new realms. The idea seems to be mature and the keyboard could convince us in the practical test. Some things were unfamiliar – but this is quite normal with new things. This keyboard is certainly not the best choice for everyday desktop use. If you’re looking for a keyboard for the couch and/or for entertainment purposes, it’s a good choice, so we can recommend it in this case. Especially the control via touchpad, joystick and the buttons on the back were very nice. The price of around 140 euros seems a little high to us, but with good will it can still be described as reasonable. 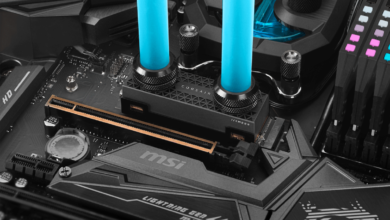