If you want to store data or transfer it from one computer to another, you have a variety of options: The most convenient is often the transfer via the Internet, for the storage of large amounts of files an external hard disk is recommended, and those who need a cheap solution for moderate amounts of data fall back on the classic USB stick. But there are other ways to transport data, and today we present a particularly fast one: A USB-SSD.

Specifically, it’s the Orico GV100, which is connected via a USB 3.1 Gen-2 port in type C format. This is sold in 128, 256, 512 or 1024 GB, although we are currently testing the smallest model. According to Orico, it should be able to reach up to 940 MB/s, just like its bigger siblings. Whether the SSD, which is offered for 80 euro (currently: Price not available *), can do this, and what other conspicuous features there are, will be clarified in the following test.

The GV100 is delivered in a small carton. In addition to the SSD itself, a short manual and two connection cables of about 20 cm length are included. With these, the SSD can be used either on a USB-A or USB-C port.

The whole thing is housed in a blue anodized aluminum case, the black ring is made of ordinary plastic. The cooling of the installed electronics is exclusively done via the smooth wall of the case, there are no cooling fins.

Inside the SSD is a carrier PCB, which houses the PCI Express controller. Above it is a commercially available M.2 SSD with the aforementioned Silicon Motion SM2263XT as memory controller and the NAND chip. The two controllers are connected to the case wall by thermal pads, but the NAND is not cooled.

The SSD is easy to handle due to its compact size, however, the solution with additionally required connection cables is not really ideal, as these also always have to be transported. On the other hand, the SSD can also be used with older USB ports without any problems, so it does not make any special demands on the other hardware.

In the AS-SSD benchmark the SSD achieves 668 MB/s in the ISO test, while the game test is at 569 MB/s and the program test at 346 MB/s. Previous USB 3.0 storage media can thus be trumped without problems, whereas we unfortunately cannot attest the promised 940 MB/s.

The same applies to the ATTO disk benchmark: there the SSD achieves up to 735 MB/s in reading and up to 625 MB/s in writing. In the other benchmarks it partly reaches lower values, but this doesn’t seem to reflect the final performance: We only needed about six seconds to write four gigabytes of music from a RAM disk to the GV100.

The Orico GV100 is fast. Very fast even, but with a good 700 MB/s reading speed in the fastest benchmark, the SSD is unfortunately still far from the promised 940 MB/s. This may be due to the fact that we tested the smallest version of the SSD with 128 GB, but we can’t confirm this for sure.

The built-in USB 3.1 Gen 2 interface can’t fully exhaust the SSD for a price of Product (test date: 80 euro); but the read and write speed is still sufficient to clearly outperform any USB 3.0 drive without problems. Thus, the SSD is fast enough for the vast majority of applications despite the missed maximum performance. The decision to buy thus depends especially on the price, and here everyone has to check their own standards. 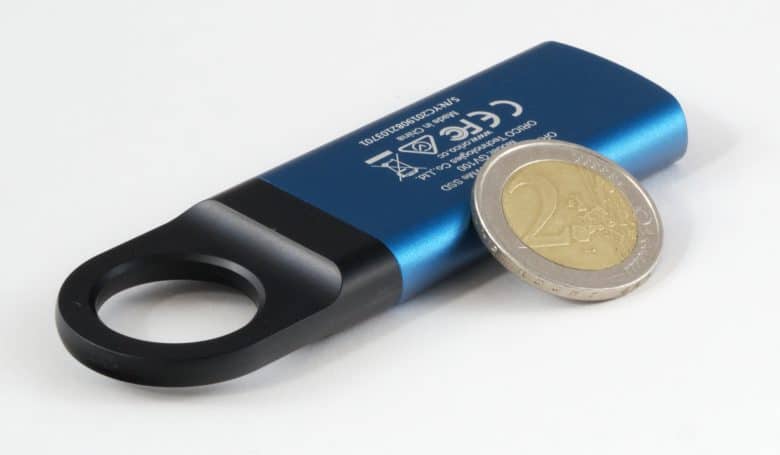 If you’re willing to buy an M.2 case, such as those sold by Orico for a good 30 Euros, you can get away with an additional M.2 SSD more cheaply and potentially faster than with the ready-assembled GV100. A disadvantage here, however, are the significantly larger dimensions, which make the drive more unwieldy.

In the end, everyone has to decide for themselves: The Orico GV100 isn’t a bargain at current SSD prices for 80 euro, but recently the SSD and its larger variants were available for considerably less. Those who can get it for 65 Euros, for example, or who are dependent on the small dimensions, can get the Orico GV100 without hesitation.

The Orico GV100 achieves good transfer rates, but unfortunately the promised values are not achieved.