Gaming chairs are now widely used and there are many different suppliers of corresponding seating furniture. So now the next product category is needed to get a gaming label, and this has already been found: After numerous gaming chairs, Nitro Concepts launched the first gaming desks in November: the D16M and the D16E.

Both desks are based on the same basic construction and differ only in the way they are height-adjustable: The Nitro Concepts D16M can be adjusted manually from 72.5 to 82.5 cm, while the Nitro Concepts D16E is electrically height-adjustable from 71 to 121 cm. This difference is also noticeable in the price: The D16M will be launched for 290 Euros, the D16E for 390 Euros. At the moment the two tables are available for € 299.99 * and € 389.90 *. They are available in black and black/red.

Today we are testing the Nitro Concepts D16E, but most of the review results should be identical to the D16M. The following pages will show what special features make the table a “gaming desk”, and how well Nitro Concepts has succeeded in making the product.

Scope of delivery and construction

The Nitro Concepts D16E comes in two separate cardboard boxes: One houses the three-piece tabletop, the other the metal base. As additional extras, the company includes three cable glands, a headset holder and a mouse pad that covers the entire table surface.

Although the table is supplied in two packages, they are quite heavy individually – so a helping hand during transport can help. But it is not absolutely necessary. The D16E can also be set up well on its own, but a cordless screwdriver is required. This is absolutely necessary: It is not possible to assemble the D16E with a screwdriver only, because some screws have to be put directly into the wood.

At the beginning the basic frame of the table is built: The columns are attached to the legs and connected by an extendable crossbar. Then two more supports follow on the columns and the table top can be screwed down. This consists of three parts and must first be prepared for this: The individual tops are held together by plastic catches, which must first be screwed on. The headset holder and the cable remote control for height adjustment can also be screwed to the underside of the table top.

It’s not quite comprehensible for us why the tabletop is attached differently in the D16E and the D16M: In the D16E tested by us, only the two lateral table tops are screwed together, whereby the middle one is only held by the locks. This solution is also stable, but why the middle table top is not drilled – as it is the case with the D16M – is not quite clear to us.

Nitro Concepts is focusing on an eye-catching look for the new gaming desks: The table top of the D16E is coated all over with a carbon-look finish, and the top is curved rather than rectangular. This curvature along the long side of the table can be used instead of the three cable outlets to route cables downwards when the table is against a wall.

If you don’t like the look of the table top, you can simply cover it with the mouse pad included in the delivery. This is the same size as the tabletop and is black or black/red, depending on the chosen colour of the D16E. The construction of the mouse pad is based on high-quality fabric mouse pads: the material and the edge seams are identical, so there is nothing to complain about here. The pad offers a pleasant surface and allows the mouse to be used anywhere without hesitation.

In contrast to the table top, the base of the table is kept simple: It consists entirely of black metal. The high weight of the metal parts is particularly noticeable: Nitro Concepts has not skimped on the material. The steel on the base, for example, is a proud three millimetres thick.

As already mentioned, and as can be seen in the pictures, the basic structure consists of the two feet and a crossbar. Parallel behind this is the bar, which transmits the rotation of the motor to the second stand. Inside the feet is the mechanism which thus lifts the table top.

In normal use the bar is not visible, because it is covered by the crossbar and of course the table top. In addition, two panels made of thin metal can be screwed on, which also provide privacy from below. But the bar cannot be completely hidden: the privacy screen does not go over the whole width.

The quality of workmanship of the D16E is good: the metal is cleanly coated and has no visible inclusions or scratches. The same applies to the table top. For aesthetic reasons, the table tops could have been made of metal, but the plastic used is strong enough for this purpose.

Practical use, ergonomics and cabling

As a gaming table, the D16E from Nitro Concepts primarily offers a corresponding look, but there are also some additional features that such a table should offer in comparison to a normal desk.

The D16E also offers some of these: In addition to the suitably sized mouse pad, there are three adjustable cable outlets and a headset holder that can be screwed on in four different positions. The cable openings conflict with the mouse pad, as the latter has no corresponding openings in the fabric. So if you want to use both together, you have to cut the appropriate cut-outs into the mouse pad yourself. Nitro Concepts is aware of this and is already working on a more comfortable solution.

Viewed individually, the cable outlets in turn do exactly what they are supposed to do: All cables can be passed through without any problems and therefore hidden by the user. The headset holder also does exactly what is expected of it: Headsets can simply be hooked in, and that’s it.

But Nitro Concepts offers no special features when it comes to cabling underneath the desk. This is where you could have set yourself apart from the competition, for example with additional brackets for cable ties. This still leaves the option of attaching cable ties in the area between the frame and the table top to keep cables or power strips in the air.

Not really (only) for gamers, but for all users the height adjustment is intended – the great special feature of the D16E. The table can be steplessly moved up and down via the screwed-on cable remote control. To move the table top from the minimum to the maximum height, the motor needs about 20 seconds. The adjustment is accompanied by a quiet whirring sound, the motor also has enough power to move a fully loaded table (see video). The heat development is not a problem: With us the motor and mechanics always stay cool.

If and how often such a feature is used is of course individually different. But at least in principle, alternate playing in sitting and standing position is possible without any problems – and those who would like to have a particularly high seat height can also do so thanks to the infinitely variable height adjustment.

The Nitro Concepts D16E proves to be a successful debut of the manufacturer in the test: Be it the thick table top or the metal frame, the gaming table leaves a stable impression throughout, and the workmanship is also impeccable.

With a starting price of 390 Euros (current: € 389.90 *), the table is very affordable for a model with electric height adjustment: In the miserly price comparison there is currently no comparable table for less money. The height adjustment works without any problems and can raise and lower the table quickly, even when a PC and accessories are on it.

Unfortunately, the D16E doesn’t get away without criticism: “We would have liked to have seen additional drill holes in the tabletop and cut-outs in the mouse pad in order to be able to reach the cable outlets. Additional options under the tabletop, such as eyelets for cable ties, would also have helped to make the table the perfect product.

But given the price, none of this is really necessary: The D16E is very affordable for what it offers. In addition, it is also easy to remedy the above-mentioned points of criticism yourself: The mouse pad cut-outs are quickly made, and additional screws can be inserted into the tabletop even without the pre-drilling.

All in all, we can therefore recommend the D16E as a buy: The table meets the usual requirements in any case, and the electrical height adjustment is well implemented. Those who can do without these, on the other hand, can get the same table in the form of the Nitro Concepts D16 at a slightly lower price. 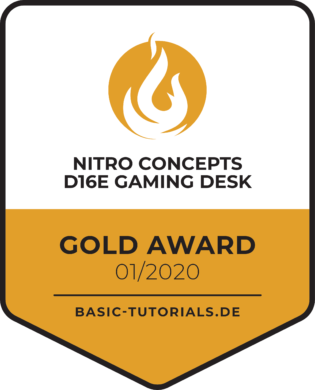 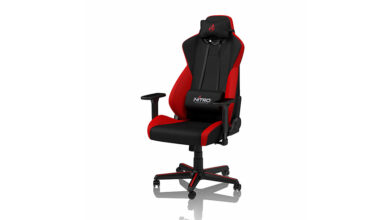 The gaming bed: The dream of every gamer?

White gaming chairs: we can recommend these models