Are you looking for a new tablet in 2022, but don’t know which model to choose? Or which operating system it should be? Don’t worry, we’ll provide you with recommendations on the 6 best devices in 2022 in our tablet review.

Tablet test: these are the questions you should ask

The tablet market has grown a lot in the meantime, so it’s hard to get an overview – especially for newcomers. Our guide will help you with the decision-making process. In the big tablet test, we tell you which device is best suited for you personally.

You should first ask yourself a few important questions:

So there is a lot to consider when you want to buy a tablet. Depending on the preferred use, certain devices are suitable for you, while others are not suitable for you at all. For example, if you are in the Apple universe anyway, the iPads are undoubtedly the best choice for you – but also not the only choice.

On the other hand, an iPad in combination with an Android or Huawei smartphone can also be worthwhile. Just like a Windows tablet can also be interesting for iPhone users. Here now follow our recommendations from the tablet test. There are the current best devices in 2022.

If you want the best of the best, there’s no way around the current Apple iPad Pro, which just got a refresh in October 2022. There are several reasons that speak for the tablet. For example, there is the powerful M2 chip, which is also used in the manufacturer’s absolute high-end notebooks.

What sets the 12.9-inch Pro model apart from its 11-inch brother is the Liquid Retina XDR display with a resolution of 2,732 x 2,048 pixels. It can especially score with an impressive peak brightness of 1,600 nits when displaying HDR content.

Combined with powerful cameras, extensive connectivity, and a Thunderbolt port, the Apple iPad Pro 12.9-inch actually has what it takes to completely replace your laptop.

However, these features also come at a price. Over 1,000 euros will be due for the best tablet in 2022, and that’s already in the basic configuration with 128 GB of storage space.

With the Samsung Galaxy Tab S8 Ultra, a tablet that is on par with the iPad Pro awaits you in the Android segment. The Ultra model can also completely replace a notebook thanks to its features. However, the device with its 14.6-inch screen is almost too bulky as a pure tablet. It is also very heavy at around 730 grams.

In return, you can expect a brilliant Super AMOLED display with a resolution of 2,960 x 1,848 pixels, up to 16 GB of working memory and either 256 GB or 512 GB of system storage, which can also be expanded via microSD card. The fast 8-core Snapdragon 8 Gen 1 processor ensures an impressive performance.

In addition, there are four speakers with Dolby Atmos support, powerful cameras, and extensive connectivity, for example to the S Pen, keyboard covers, and much more. The large battery with a capacity of 11,200 mAh could, however, last a bit longer, but Samsung charges it quickly with 45 watts.

11, 12.4, 12.9 or even 14.6 inches are too big for you? We can well understand that. Fortunately, there are also a handful of compact tablets on the market. These can even be held comfortably in one hand.

The best small device in the tablet test is clearly below the 10-inch mark, namely the Apple iPad Mini 6. It has a screen diagonal of 21.08 cm or 8.3 inches and still offers a resolution of 2,266 x 1,488 pixels. This results in 326 ppi and thus crisp, sharp pictures that look great thanks to a maximum brightness of 500 nits.

However, the Mini does not have the 120 Hz display of its bigger brothers; the maximum is 60 Hz. Apple does not use the M1 chip either and relies on the A15 Bionic instead, which is also used in the iPhone 13 generation. However, it provides a more than sufficient performance for most applications and even copes with professional image and video editing.

The handy size and light weight, combined with strong performance and long battery life, make the Apple iPad Mini 6 the best compact tablet. However, the internal, non-expandable storage of 64 GB is quite tight. Connecting external hard drives is no problem thanks to the USB-C port. In terms of price, the Mini iPad starts from € 475.00 *

Our current price-performance tip is based in the Android segment and goes by the name Samsung Galaxy Tab A7. The tablet has been on the market since the beginning of 2021 and cannot quite keep up with the current top models in terms of installed hardware.

It features a 10.4-inch TFT display with a remarkable resolution of 2000 x 1200 pixels and a frame rate of 60 Hz, as well as a decent 8-core Snapdragon 662 processor. Fortunately, the 32 GB internal storage can be expanded via microSD card. USB Type-C and 3.5 mm jacks are also available.

In addition, the A7 still scores with a very good battery life and offers a wide range of apps, thanks to Android.

If you don’t necessarily need the best possible performance and mainly want to use your tablet for surfing, consuming media content and maybe taking a few notes, the Galaxy Tab A7 is still a good choice. Especially since the tablet has become really affordable with currently around 240 Euros.

For Windows fans who want to stay loyal to Microsoft’s operating system, the Surface series from the Redmond-based company is a good choice. At the end of 2021, they launched the Microsoft Surface Pro 8, an enormously powerful 2-in-1 convertible, but its focus is more in the tablet segment. In October 2022, the Surface Pro 9 with more performance and alternatively an ARM chip followed.

Compared to the otherwise common convertibles, the Surface Pro 9 is thus primarily a tablet that becomes a notebook in combination with the keyboard – and not vice versa. Accordingly, the Microsoft device will also be offered without a keyboard and will launch on November 08, 2022 from a price of 1.299.00 euros.

For that, however, you already get a lot on offer. The device is optionally offered with Intel Core processors of the 12th generation, the Intel Core i5-1235U or Intel Core i7-1255U, which combine two performance with eight efficiency cores and an integrated Intel Iris Xe graphics unit.

New, however, is the optionally available ARM chip in the form of the Microsoft SQ3, which is again based on the Qualcomm Snapdragon 8cx Gen 3. This eight-core CPU is manufactured in a 5 nm process and relies on four powerful ARM Cortex X1 processing cores and four efficient Cortex A78 cores.

The SSDs in both variants are replaceable and can be configured with 128 GB, 256 GB or 512 GB. The Intel model even has up to 1 TB of storage available. There are also differences in terms of battery life. The tablet with Microsoft’s SQ3 is supposed to last up to 19 hours, while the Intel version is expected to last a maximum of 15.5 hours.

The Microsoft Surface Pro 9 relies on a 13-inch PixelSense Flow display with a resolution of 2880 x 1920 pixels, a contrast ratio of 1200:1 and a maximum brightness of 450 nits in both variants. A dynamic refresh rate of up to 120 Hz and, of course, a 10-point touch control are also offered.

In addition, there are two 2-watt stereo speakers with Dolby Atmos, two far-field studio microphones and two cameras, whereby the front one also enables logging in via Windows Hello and resolves in 1080p. The rear camera resolves with 10 megapixels and allows videos in 4K resolution.

Looking for a compact, rugged, and beginner-friendly tablet for your kids? Here, the market is very manageable. Fortunately, mail-order giant Amazon has recognized exactly this gap with the Fire 7 Kids Edition and filled it excellently. Since May 2022, there is also a new edition of the best tablet for kids.

For around 110 euros, you get a beginner-friendly device that you can put in your kids’ hands without worrying. Thanks to a sturdy and colorful case, the tablet is protected from drops or damage and fits in small children’s hands thanks to the compact 7-inch display.

Even more, the entire operating system is designed for child-friendly operation, which even a four-year-old (I speak from my own experience) can manage without any problems. Parents can make additional settings in the corresponding dashboard and, for example, set time limits or filter the content if desired.

The technical features of the Amazon Fire 7 Kids Edition do not tear out any trees, but offers enough power for children to cope with various games, video content and much more. Only the 16 GB or 32 GB internal storage is extremely tight, but can be expanded via microSD card.

However, iPadOS, Android and Windows are not the only operating systems available on the tablet market. There are also other providers that could be more suitable for you, depending on the requirements.

One of them is Huawei, which also offers a first-class tablet in two sizes (12.6-inch and 10.8-inch) with its MatePad Pro. From a technical point of view, the devices do not have to hide behind iPad or Samsung Galaxy Tab and are especially interesting for those who call a Huawei smartphone their own.

The reason: The manufacturer’s own Huawei AppGallery is used here, which not only lacks all Google services, but also many popular apps, such as Spotify, Netflix or other streaming providers.

The situation is similar with Amazon’s tablets, namely the Fire and Fire HD models like the new Fire HD 8. They offer rock-solid features at an absolutely fair price, but also have to live with some limitations in terms of app selection due to Amazon’s own operating system.

When it comes to tablets, you’ll have more choice in 2022 than ever before. Devices in every operating system are available in all possible sizes, shapes, colors and, of course, price ranges. Of course, you are spoiled for choice and it depends on what you want to use your tablet for. However, you will definitely not go wrong with our recommendations from the tablet test. 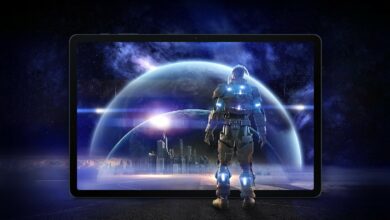 Are you looking for a new tablet in 2022, but don’t know which model to choose? Or which operating system it should be? Don’t worry, we’ll provide you with recommendations on the 6 best devices in 2022 in our tablet review. Tablet test: these are the questions you should ask The tablet market has grown … (Weiterlesen...)